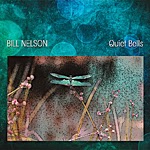 Fans of influential guitarist and arranger Bill Nelson may be familiar with the artist's current plight - to a musician of some considerable standing and ability, a loss of hearing in one ear is the ultimate nadir. Thankfully, despite or because of this hinderance, Nelson saw fit to compose an album of quasi-ambient instrumentals. The healing process rarely sounded so hypnotic.

Quiet Bells features eighteen richly-textured guitar pieces that float, swoop and drift without any immediate or obvious hooks and riffs, just wave after wave of atmospheric melody and trademark glissando. If you're a fan of his wistful collaborations with David Sylvian or Nelson's own Chance Encounters In The Garden Of Light, you'll warm to Quiet Bells pretty quickly (that's if you can find a copy - 500 sold out in days).

Mesmerising, meandering but rarely directionless, much of this rather lovely album forms a pleasing one hour in the company of a man who knows how to woo with his 'Astroluxe' guitar. The likes of We Here Who Were There and Chiming Shires wouldn't sound amiss on Getting The Holy Ghost Across, while Transcendental Tittycups sports both a great title and a nod to psychedelia in the mix.

Prolific is a word often directed towards artists whose quality-control has diminished - quantity over quality you might say. In Bill Nelson's case, Quiet Bells proves that even after around 100 recordings across several decades, the axeman has still got 'it'. Make the effort to seek this one out.