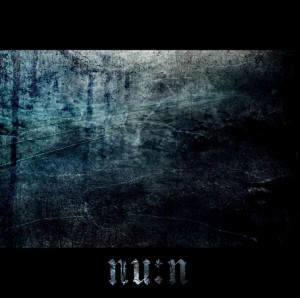 I guess there’s no real goth scene in Porto, but the Portugese city definitely has a goth rock act to be proud of: Nu:n, which stands for Nothing Unveils Nothing. You have to take the band’s name literally, because they don't reveal who they are. At least we hear how they sound and that’s just splendid.

A track by Nu:n was featured on the compilation Road To Sacrosant and now the band releases an album that comes in 500 copies. Nu:n reveals the reason why its name is often cited by goth rock fans who follow the underground scene. Due to the fact that the voice is similar to Carl McCoy's, you note down in your book of references the name of Fields Of The Nephilim, but Nu:n is no copycat.

Even if Nu:n starts the album with a cover by the obscure band Vestigia (In April Of 1984), the band shows that it has a very specific sound and that the music is all about emotion.

Under Your Stars Above is a tad heavier and the song really sounds as if it was recorded in the eighties. In thisr case that is an advantage, because who wants to hear traditional goth rock that betrays its roots?

From anger to emotion, it’s only a small step for Nu:n. Scorpio Rising has everything a perfect goth rock song needs to have. Just close your eyes on the melodic guitars, swing your hips, spread your arms and let yourself drift away on the magic of this band. Goth rock at its best...

The Portugese goth rockers do not brutally awake you from your beautiful dream, because Dawn Of Terrestrial Birth is a magnificent 4AD-esque piano interlude, soon followed by Elysium For The Weak, in which Nu:n sounds very similar to McCoy’s band for the very first time, but remains very original. Dance To The Sun (also included as what is called a nihilistic version) could be a Nu:n classic.

This City This Woman sounds like a ritual, and surely reminds you of the mystique world Merciful Nuns is known for.

Nu:n is absolutely recommended if you’re addicted to dark sounds.