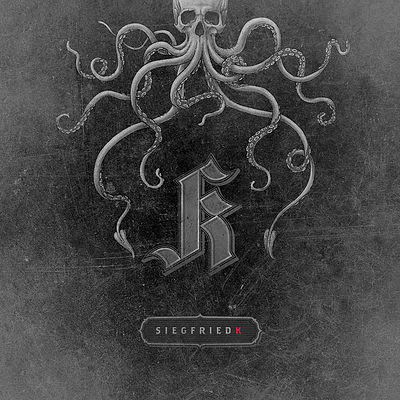 K always comes out at the beginning of this year’s for the mysterious Blücher Records. The formation of the band is established by Cementoacciaio and the opening of Kundalini Rising, and shows immediately the caustic regeneration of Siegfried's claw, the previous keyboards dark wave of Lucia Vincenzi undergone both a disturbing opening "Kraut-Muzik".

The instrument is placed in opening of a sequence of songs in which the Kraken is more near and threatening (Siegfried K was also a German railway gun used in WW II of 380 mm!). Distonia!

The first single comes with a video clip (as always by "Dinamoscope" Simone Poletti): a blitzkrieg to the sleeping consciences with a guitar riff that you paste to the brain like a tentacle of light. That light, which as stated Leonardi with the revelation creates "pain", the awareness and consciousness of pain. Bubbling cosmic synth... the soul pushed on the meat. Have you ever tried it at least once in your life? We surely did. And you ?

Sentenza is a small gem dreamlike counterpoint by light-dark keyboards-guitar. "The hilt that keep in honor of the sacrificed, the blade is revenge, sharp in hatred is the epitaph of..."Sentenza "

Echoes of "Malesch" of Agitation Free that are leading the way to the explosion of the song Berserkir: "A race of warriors wolves to the wild hunt!"

The god of wrath and his warriors they shoot down with extreme ferocity on the modern world. The guitars ignite in brutal battles. Dust, blood, banners, armor. Psicopolizia pulsates in a quiet urban vortex in which reverbs, echoes, and cosmic waves carry the listener into a surreal dimension, a futuristic psychedelia in which the mind is dilated. But not for long, Siegfried shows teeth and remain only motionless bodies after the passage of the warriors-bears.

Immediately the whine guitar of Fabrizio "Fofy" Forghieri flows into a delirious ride that's named La Follia di Nijinsky, in unison with the bass of Luigi Napodano and the frenetic drummer of Yari Ugolini. "I am not a man but a wild beast, but I am not afraid 'cause I learned to fly."

Lyrical thrill, the manifesto of the modern warrior, this piece combines all the philosophy of Siegfried. Hold a grudge, and cut down the moderate in you, burn down the living room.

The hour of a new "Concept" is not approved, not subdued, do not comply with the various "single thoughts". The ancient Way of the Warrior.

Followed by On A Erotik with the spectral melancholy of Notturno D 'Ypres in Salmo Delle Tempeste. Love, death, beauty... a lovely ballad that is materializes at the horizon: a high granite tower. However, the magic does not last long, Kali Yugi pours again with its electronic glitch on the war front. The storm rages, the squeak of new guitars, before the world see its ashes, the "Kraken" arise !

Dark, subdued and a permeate of poetry, the song rises and rips in Sabbath derail degenerate son of Phallus Dei (Amon Duul II), then suddenly here is the manifest roots, surprisingly the refrain of Trans Europe Express by Kraftwerk, a semi-joyful emerges from the abyss K.

Her historical and analog compulsiveness announces the most vibrant and lysergic Kenaz Muzik. The electronic beat speeding into a pagan dance (who knows what she would think of Amodali by the glorious Sixth Comm / Mother Destruction?), delicate manoeuvring and leaves in coda the hidden track La notte di Valpurga about which I write nothing, just discover it!

Everything is masterfully concocted by the quoted Yvan Battaglia, the great sound designer, but also Les Champs magnétiques with Monica Gasparotto, the Italian jewel band of audio-research from the 90's and already been reviewed on Peek-A-Boo with his current project Carnera.

What to add? If you are among the sleepers, "luck" has given you a new opportunity. Yet, another pill to awaken from your conscience. But if you are afflicted with "isms" and miasma, then there is no cure for you. The only remedy is the Berserkir, or even before the pathetic self-pity dive from the bridge.