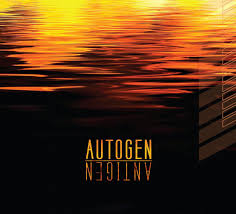 Antigen kicks off with statics, deep pads and heavy, slow beats on a background of glitchy and distorted noises. However track two Mortuummakes for a confusing flow breaker with its female voice on a track I'd mostly be expecting to hear in the last minutes of a French movie. It's a pity because without this breaker the album flow would've been almost perfect. But that's what the "Next" button is for and Autogen quickly redeems themselves with the third track Bunkergang which continues where track one took off.

The rest of Antigen is pure industrial techno joy. I really enjoyed this album. Even in the most noisy parts (which really aren't that noisy) the melodic content (sounding very often like a glitchy, gated vocoder) is in focus making this album accessible to listeners outside the most hardcore inner circles.

Deep, techno influenced bass and an insisting kick added to melodies with a clear progression makes for an album equally suited for close listening as for the dance floor. However some may consider Antigen a bit too long and it could have benefited from a tighter curation.