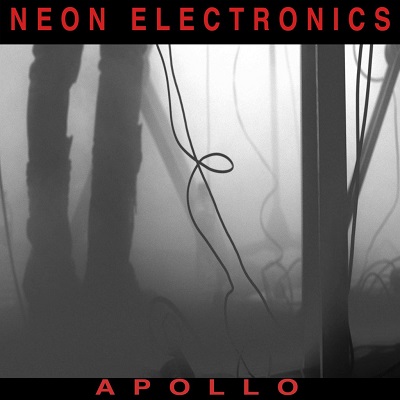 Marking twenty-years since their first release, Neon Electronics are firing on all cylinders and releasing a new long-player on April 12th, the sublime and transcendent Apollo. What once was a side-project of singer and guitarist Dirk Da Davo, has now become his main focus. Flanked by Pieter-Jan Theunis and Glenn Keteleerand, the Belgian-power trio deliver a passionate exploration, crossing ambient techno-grooves with colossal experimentation.

There is no sell-out moment on Apollo, this an album propelled by personal messages of hope, steering clear of the romantic, dry moments. This ten-track revelation opens with “El Barranco”, a shoegazing seminal track of snapping drums and melodic bass. The song nails perfectly the intention and direction of Da Davo, dystopian and dramatic as the electronic phasing builds a surreal, paranoid tension.

“Follow Your Dreams” ignites with a more modest and minimalist framework, slowly starting to fully open up as the pleasing vocals cry out to the audience with a mission statement, augmented by samples and frantic guitar and bass lines. At times the sound of Apollo may perhaps be anchored in the past, but this release pushes forward, taking the best of synth moments from the eighties and twisting them into the twentieth century.

“Invisible Man” is both industrial fused and melodic, subtle synth and pulsating bass guide the track as Glenn Keteleer‘s vocals are delivered with urgency and humility. Quick-fire beats and heavy sampling herald “Mondriaan”, a wounded-electronic beast which stalks the listener. Helped by assaulting drums which echo throughout, the electronic phases circle the outskirts of the track. Here Neon Electronics go fully into the post-apocalyptic, Orwellian landscape with a fantastic display of painting surreal pictures with electronics.

Neon Electronics are not reinventing the wheel on Apollo, there simply is no need to. What they do, and the sound they capture is done so stylishly that it becomes their own unique brand. This is a release which is stamped with the personal trademark of a band who, although two-decades into their career are really only getting started and showing what they are capable of.