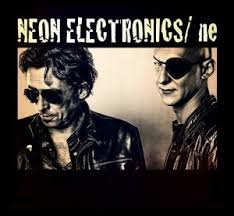 We all know Neon Electronics as a side project of Dirk Da Davo, the half of the legendary band The Neon Judgement. Since 1999 this Belgian electro pioneer gave us some fine tunes with his more techno body inspired sound. These days Dirk made a collaboration with Glenn Keteleer, aka Radical G., the dark techno and underground producer. The guys have a common ground, both already co-produced tracks with the likes of The Hacker, David Carretta and Millimetric, and made applauded appearances on Dave Clarck’s ‘White Noise Radio’ playlist.

This new CD ‘Ne’ is surprisingly variable in styles, and it is much more than just a side project, the tracks all have a specific character in areas of electro-underground music. The mix of Dirk’s older danceable new wavish ideas fit perfectly with Glenns more modern techno beats. So ‘Ne’ has it all, pounding beats, fresh soundscapes and even some twisted dub tunes.

The album opens with the track ‘157’, dark beats, firm basslines, Dirk singing in French, perfect vintage electro with a great 80s' touch. Followed by ‘Wicked’, perhaps the most rock and less danceable track on this album, cool guitar tunes and vocal echos, a real new wave classic. On ‘Cero’, one of my favorite tracks, you definitely hear the strong influence of Glenn (Radical G.), techno tunes take this body-tech to a higher level, and some brilliant Spanish vocal samples,push this track to be a dancefloor killer.

But the variety of this album is great; ‘Road To Freedom’ or ‘Glimp’, have a bit the same sound color as the Neon Judgement, but it still sounds very fresh. Even some great minimal tunes can be heard on ‘Over And Over’. But my absolute favorite is ‘The Purple Noise’. The Neon Electronic guys give us some heavy breakbeat and rhythm 'n noise tunes, repetitive loops that will attack your body and mind, a brilliantly made industrial track.

The final part of this CD of ‘Unknown Pleasures Records France’ contains some nice remixes, more danceable than the original sounds. The deep grooves, sometimes even with a rather funky-electro approach, carry you away to a nice club to dance the night away. So everything on all this album will please a lot of people, from danceable new wave to club tunes, from EBM influences to minimal sounds and even a great rhythm 'n noise track.