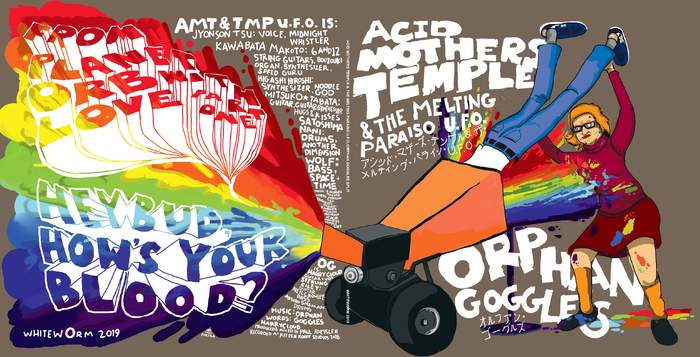 For Orphan Goggles their new split single with Acid Mothers Temple & The Melting Paraiso U.F.O. probably was the best way to release such a powerful song as “Hey Bud, How’s Your Blood?". It sounds more powerful than any of the songs on the band's last album "Minus Grin". A real paranoic noise-rock. A real combination of The Jesus Lizard-like sound and wonderful and frightening lyrics. Something quite unstable, resonating with the psychological frustration of the "Acid Mothers" opening track "From Planet Orb With Love part.1". Thibetian mantra repeated again and again on the background of sounds and sound forms changing their shape further.

The most interesting in this combination of things that you won't hear in the second part of "From Planet Orb With Love". But instead of it, you'll more get something as if David Yow had just jumped from the stage, Orphan Goggles would beat you with the real madness of their chords.