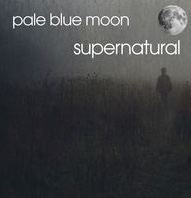 This year sees the hardworking, Irish three-piece Pale Blue Moon set to release an album which promises to be a statement of intent- ‘The Pleasure Of Finding Things Out’.
The outfit comprises of Shane Kelly-Vocals/Guitar, Mick Brady-Bass Guitar and Brian Griffin on drums, all veterans in their field via other acts, this may not be their first rodeo but it certainly is the one that promises the most success.

After a year of uncompromising recording under the guidance of producer Brian Sperber (Moby, Staind) the album is almost fully formed. By all accounts It is an album which is aching to see daylight or rather moonlight and, as a taster of what is to come, the band are releasing globally both the single and video to the first cut-‘Supernatural’ on the fifteenth-of-March.

Pale Blue Moon swing on a stylistic-ledge, balancing comfortably between old-school acts such as The Cult and The Cure, bringing an updated feel to nostalgia. An eerie-gothic sound mixed with an accessible-rock sound, sculpted specifically to draw you into their world. As debut singles go ‘Supernatural’ is a lot more fully formed than you might expect, a mixture of both talent and musical-maturity is front and center. The vocals of Shane Kelly are inspired, the ease at which he reaches for and hits those high octaves is astounding for someone who is only gaining recognition, while the rhythm section of Mick Brady and Brian Griffin keep the music flowing perfectly.

The video typifies all the elements of Pale Blue Moon, perfectly themed to match the dark-transcendent intensity of the track, it relays the nightmarish aspects of both death and desire all to the backing of the atmospheric ‘Supernatural’. All this points positively in the direction the band are heading, as we await the single and album release we can relish in the dark madness that is the mini-epic video.