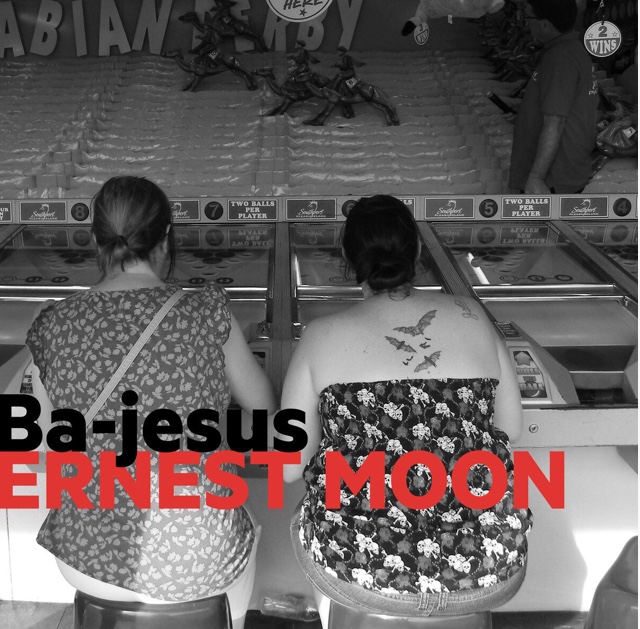 Ernest Moon, the brainchild of dynamic duo-Steven Doran and Brian Murphy. Two charismatic Liverpool gents who are bringing their own brand of indie-rock to the world stage through the release this April of their Ep ‘Ba-Jesus’.
Everything, including a kitchen sink has been skillfully thrown into these four-tracks, slightly tongue-in-cheek but delivered with a solid passion and belief in what they can achieve.

Following on from the Ernest Moon release of last October’s -‘Uh!’, there is a faithful lack of maturity thankfully on display, kicking off with the weekend ladish-anthem ‘Satdeenight Ready’. A two-minute tour-de-force, hinged on good time ideals which grooves under a hypnotic bass. A track wholly addictive and reaching back to old-school punk for its influence.
‘Paddle Boat’, the longest track on the set, clocking in at a little over four-minutes is a reflective acoustic-driven number. Memories of broken love, sung with a subtle half-whisper and a ladish point of view-“Lagery Lips”. Beautiful and poignant, executed stylishly.
‘Minxed Driks’, a cracker perhaps influenced by the big-smoke of Dublin, opening with dialogue as the duo enter a party, backed with some classic surf-style guitar, an almost soundtrack to a miniature movie created within a soundscape.
Closing with the anti-establishment ethics of ‘Capitalism’- spending money and why we feel the need to. A guitar-heavy track delivered through indie-ideals with a punk message, the perfect finale to what is a cracker of a release.

The name ‘Ba-Jesus’, an Irish saying meaning disbelief, prompted by Ernest Moon’s relocation to Dublin to soak in the culture. The tracks were recorded at Orphan Studios, the studio owned by one who joined these working class heroes on this adventure-Gavin Glass (Lisa Hannigan/Paul Brady) and mixed by Pete Ashmore-who also added the drum-tracks. This is a very well produced and performed release, balancing on the edge between indie-alternative and folk it is fully realized in a short space of time.