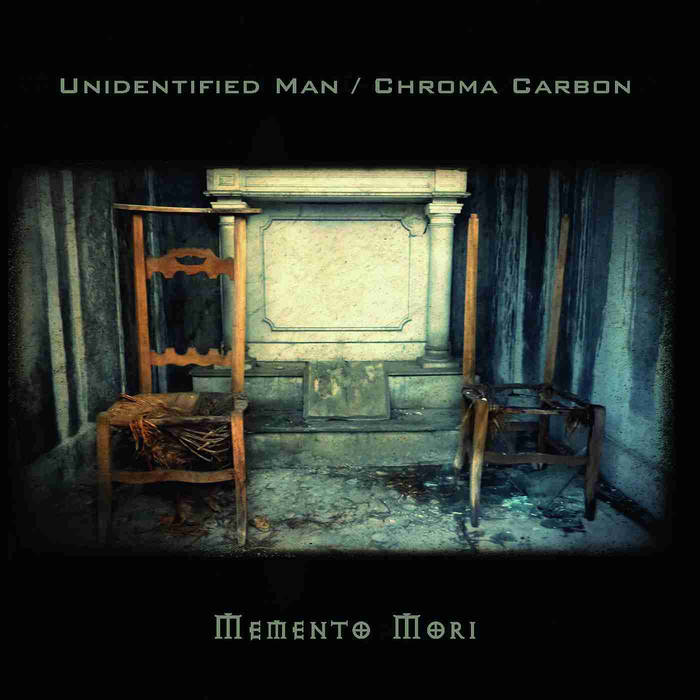 Unidentified Man, the dynamo of the dark scene returns with a new album, a collaboration with Chroma Carbon (Francois Ducarn) in the electro-gothic release “Memento Mori”. Hailing from somewhere in Belgium, Unidentified Man sprang to prominence in 2013, here however the music is taking a fresh dive into the abyss of ambient-grooves, all galvanized by the vocals and lyrics of Chroma Carbon. This release is more the result of a project between the two artists than a straightforward album, but the genius intertwined within every square-inch makes this one of the more interesting releases so far this year.

A vibration of nostalgia is front and center as the sound erupts, shades of seventies and eighties electronica. The sense of paranoia is laced with waves of computerized doom erupts from the opener “Sense Offender”. Snapping-robotic handclaps over a flourish of bleeps and distorted words, futuristic but with a foot placed firmly in the territory of seventies-Krautrock. This tension building exercise sets the scene perfectly, as Unidentified Man pulls the listener kicking and screaming into his Orwellian world.

“Squandered” continues the adventure, more of an eighties-Depeche Mode feel, with lyrics more front and center from Chroma Carbon, not sang as such but delivered and direct. “Klingelied” advances forward, a sense of an eighties-sci-fi soundtrack enters the atmospheric track. A standout of the release, minimalistic in nature but hypnotic in its in-your-face explosion of pulsing beats.

Although “Memento Mori” is an album built on electronic foundations, there is enough passion injected into this release to make it an addictive affair of futuristic soundscapes.
It does however, point fruitfully in the direction in which Unidentified Man is heading, the only qualm is six tracks is simply not enough and the listener will crave for more.