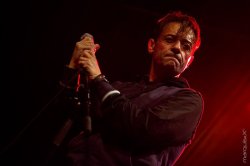 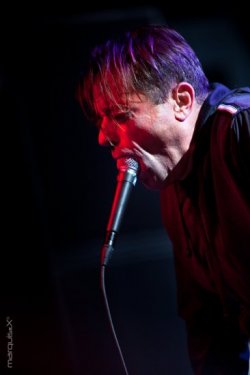 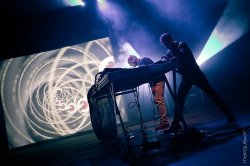 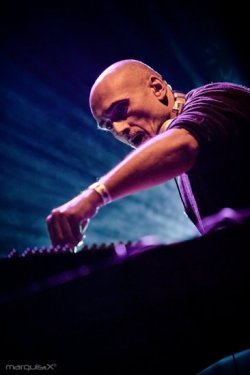 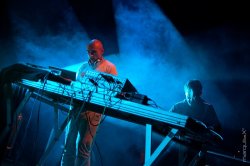 I stopped listening to electronic music in 1981. We quickly followed our own personal way of making music.

Esplendor Geométrico is a Spanish industrial band conceived in 1980 by Arturo Lanz, Gabriel Riaza, and Juan Carlos Sastre. In 1990 they were joined by Saverio Evangelista and together with Arturo they created a sound that was pivotal in the rhythmic industrial genre.

Arturo moved to China and thus gigs became scarce but since 2009 they are back with their album 'Pulsion'. A lot of their 80's albums like Mekano Turbo have been rereleased and the newest album is Desarrollos Geométricos. I haven't heard that one yet so I'll only ask questions about Pulsion. Your reporter quickly travelled to Spain and China and here is the resulting interview. They did an amazing gig at Bimfest in 2010 and now you have a chance of seeing they live again at Shadowplay the festival!

Hi Arturo and Saverio, could you introduce Esplendor Geométrico for our readers?


Arturo: Esplendor Geométrico is a band that makes intense music, visceral, hypnotic and is based on industrial percussion and obsessive rhythms.
Saverio: Esplendor Geométrico was born in Madrid over thirty years ago... and much has happened since then. The first album was industrial but since then our music has evolved and today it's not that easy to define. The best way is probably 'electronic tribalism'.

What were your influences? Suicide? Throbbing Gristle?

Arturo: My first influences were when I was with El Aviador Dro (1979) and then it were The Sex Pistols, Pere Ubu, Neu! and the first Throbbing Gristle and Cabaret Voltaire. I stopped listening to electronic music in 1981.
Saverio: Yes in the beginning it was mainly Throbbing Gristle and Cabaret Voltaire but as we said, we quickly followed our own personal way of making music.

You really are pioneers, ever imagined your career would become so long and influential?

Arturo: No never, that was also never our intention.
Saverio: We also never thought about calling it quits. Our secret? Probably that it has never been a stressful activity. We have all the time in the world to make decision concerning Esplendor Geométrico.

I have a few of your album, the 1980-1982 compilation on Staalplaat and Tarikat. It strikes me that 'Pulsion' has a warmer character then the machinal noises of before. Do you feel the same and why is that?

Arturo: In the 80's our sound might have been colder and more minimal, except with Mekano Turbo.

Pulsion reminds of pulsating or a pulsar, natural phenomena so the title seems logical.

Saverio: Your feeling is right, we do consider our last album as more organic and less mechanical. The title actually means our natural drive of doing something. When we make our music it really is a natural thing, we can't help doing so!

The songs with Japanese sounding titles (Japo and Mishi Mishi) are the harshest I think, is that a coincidence? Because Japanese noise is in a league of it's own...

Arturo: That's a coincidence!
Saverio: Propably a coincidence. But we do know Japanese noise is very extreme, a lot more then Esplendor Geométrico!

What gives you inspiration?

Arturo: China gives me a lot of inspiration, with their rich culture and traditional music. I've been living in Beijing for ten years now.
Saverio: The music itself, it's not something conceptual, it really is born in a spontanious way...

Arturo: Thankfully it has not hit China hard, it's a country of constant change and growth.
Saverio: We did not change our music just because there is a crisis now. But music lightens the mind and maybe that's why we have been playing live more then ever.

You sound a bit like SPK, showing the facts in a neutral way without taking a position, leaving that for the audience itself.

Arturo: Yes I think so too. We met Graeme in 1981 and sent him our first single (Necrosis en la Poya) and our first tape. He liked it a lot and also thought we had many similarities. I loved the first SPK records!
Saverio: Yes that is absolutely right! That's also our way of bringing out the facts!

I heard stories that your liveshows can be very extreme, like in 1996 in Belgium where people started throwing around tables and such. Any other anecdotes on previous gigs?

Arturo: Umm, I don't remember any of that...
Saverio: Are you sure? I also don't remember that. For us it was a great gig! But when we get on stage we tend to lose ourselves into the music so we might miss a few things happening in the audience!

That being said, what can we expect for the upcoming gig at Shadowplay?

Arturo: A powerful show with our typical sound. I hope you will have as much fun as I always do during a gig!
Saverio: We really enjoy playing live and the audience feels that we do. It's always a blast and we give everything during a gig!

2ND CIVILIZATION • It all started somewhere in 1986 in the garage of my parents...
SERPENTS • I think Serpents could have been bigger, if we had signed a CD/LP contract after publishing the first tape. It was the beginning of the dark wave and EBM movement in Germany, but we didn't.
VISION TALK • We will try to make the best synthpop album in years. That is our plan. Lets see if we can do that.
AIMLESS DEVICE • We were a hard working band in the rehearsal room and in the studio, and we took our gigs very seriously. But in terms of promoting ourselves, we were absolute shite!
GUILT TRIP • Our expectations are World Domination. Why not? If Barry Manilow can do it so can we.
DEINE LAKAIEN • After hundreds and hundreds of concerts in our career we must tell that no venue is better than the audience!
WHISPERS IN THE SHADOW • We take you back to the wound Return to the pain We show you where it hurts the most And you will gasp for rain (from “Back to the Wound”)
DIORAMA • 'There’s something strange and uncontrollable happening on stage that flips a certain switch'
THE KLINIK • We always prefered to be the underdogs and do what we really like to do without making compromises.
MILDREDA • Mildreda is like talking in my mother language again, as the dark electro tunes comes out very naturally…