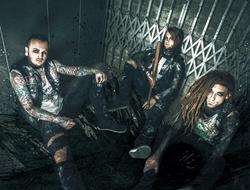 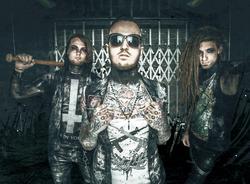 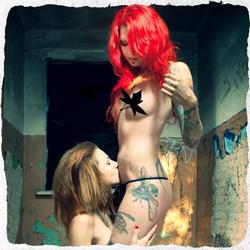 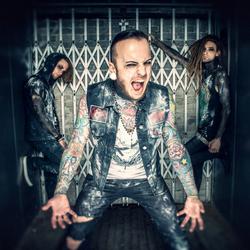 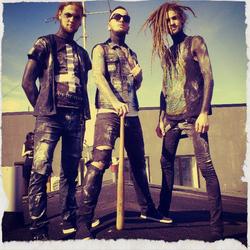 Would be great to remix almost any track by Alice Cooper. Why? Because this dude rocks!

Until recently I was somehow neglecting this band and then came the DWA compilation and their newest cd via Alfa Matrix … So time for a chat and for a revelation for me: they are from Estonia!

As this is my first interview with you I want to know how you decided on the band’s name?

Freakangel is just a game of words... Its combination of something ugly and something beautiful... It shows that no one is perfect and that we all have our dark secrets... Someone's “dark passenger”.

You just released a new album, how are the reactions so far?

It's great to see that listeners can hear the difference and that they like it... mostly. There are always people who will never accept anything new and will continue on barking about first album being cooler than anything released after it.

I love the artwork of the album, can you tell us more about it? How important is artwork for you?

Thank You. Artwork and concept of the album means a lot to me. Because first of all You see the artwork and then You get the music. So we always try to bring something special that will somehow describe what is this album about.

You had to make 2 versions of your recent video clip. Did you expect it? What was the real problem of YouTube?

We were curious about it, yes. I mean... I have seen videos being removed from YouTube because of nudity... for example Ghost B.C. - Year Zero... So yeah... we created censored version few days before we got banned. It was like our plan B... but good thing is that there is Vimeo... and they don't care about nudity.

How important is a video clip for you & can you tell us a bit more about the making off the clip?

Video is always a good thing. Because it shows all the changes that You would like to bring with music. As I said before about the artwork... first of all You need to bring some image to get the audience. This video was done with a big help from our IndieGoGo backers... Thank You, guys!

I at some point compare your sound with C-Lekktor versus Channel Zero, Sepultura and Marylin Manson. Is that fair to you or do you see more into other bands? Who did influence you?

There is no secret to be told... I like MM's music since Antichrist Superstar... I also like some deathcore/metalcore bands... Motionless In White or Chelsea Grin for example. About electro bands... well... I think I'm getting a bit depressed about what is happening in this scene... so can't comment anything here.

How did you decide on the sound for the new album? I believe that nowadays it’s really hard to stay innovative, how do you work on that?

This album was done as a band. Everyone in Freakangel was working on it. And the most important secret is that we said “fuck you” to everything that we have done before and just decided to go wild here... we all like very different music and so we just combined everything that we like in one record.


Who writes the lyrics and decided about them for this album? Any thoughts about them?

I write lyrics... “The Ones To Fall” is about destructive emotions and about feelings in total... about being weak... and not being able to stop when You need to stop...

What is ‘The book of violence’ about? Any specific book in mind?

The Book Of Violence is about our life. About weakness that takes human lives... Also I got pretty much hyped about discovering one book by Wataru Tsurumi “The Complete Manual Of Suicide”... so I have also kept this book in mind writing this song.

How was it to work with Javi Ssagittar? I loved the song ‘into the fire’.

Javi is a great guy and a real pro. I have been working as remixer for one of his songs so we knew each other before for quite some time.

You also worked together with Peter Crane (‘Release your anger’), can you tell us more about it?

Pete is a wonderful person and working with him is a great experience. This guy is also a total pro. I mean... he works on co-op much faster than I do. And this is not our first co work with him... we have done remixes for each other, Pete was also doing guest vocals for my other band – Suicidal Romance... we have been even performing together “My Darling Bullet” at Summer Darkness Festival in Holland...

Great bands! Nothing else to add...

They all featured or would have featured on the VP live 2014, but due to fundraising troubles it didn’t get through, have you had similar things happening to you? How hard is it nowadays to get enough gigs and paid out for gigs?

“Dark “scene is dying nowadays... so no wonder that those things are happening... It's all about being active and about understanding that Russian promoters can't pay You as much as promoters in Germany for example... it's all about co-work.

You also featured on the DWA 100 remixes compilation. How did that work out?

Our first album “The Faults Of Humanity” was also released by DWA under license from Alfa Matrix. Jamie is a nicest guy ever and working with bands that are located on his label is a quite nice experience... I kinda really seldom tell him that I am not available for remixing works...Mostly I am always there to help.

For the rest: it's a cruel world... no need to believe everything You hear.

If a simple phone call could get you a remix by any artist, who would it be, which song & why?

Don't know... To be true I do not care that much about remixes being done on my music...

Who do you want to remix (artist, song and why?) if a phone call was enough?

Would be great to remix almost any track by Alice Cooper. Why? Because this dude rocks!

How is it to bring out music on the A. Matrix label?

What is your dream/goal with Freakangel?

There is no such thing as a goal... You just need to go forward and forward through all the shit that life sends. There is no end.

Do you know already at which great festivals you will play the next months?

'till the end of 2013 we would visit Finland and Russia to support our new album... in 2014 there will be more dates to be confirmed by at the moment we are booked for Resistanz Festival in UK...

How is touring so far? I read that you played recently twice in Estonia? Can you tell us something about Estonia? Did you meet with Metsatöll (one of the finest Estonian Metal bands)?

We are from Estonia... so we play here quite a lot. Metsatöll is a great band with a huge fan base!

Rock'n'roll! Hope to see You all on the road one day!

Here are my reviews:

THE EXPLODING BOY • Hopefully Editors could invite us as a warm up-band so we could kick their asses stagewise!
EX-RZ (INTERVIEW WITH PETER SLABBYNCK EX RED ZEBRA) • I want to stay very close to my fans! That’s why I want to organize these concerts in the living rooms of my fans … I want to thank them in my way for their support during all those years!
AMBASSADOR 21 • We love what we do and if we return 10 years back, we wouldn't like to change any moment.
CEDIGEST AND RUINIZER • READERS; If you buy my new album, I'll send you a sweet picture of my corn hole and you'll wanna take it to your room and put it in your special box. 100% Guaranteed.
ELEMENTS • One band is consistently cited, if people compare: The Sound
SCHALTKREIS WASSERMANN • We had very little money at that time. I had been playing guitar a long time before Schaltkreis and owned some effects. The first thing that Stella and I bought together was the Roland Space Echo RE-201 that I still have
PHOSPHOR • Our name reflects the kind of darkness that we make, but also the light that we bring to people's lives...
XIU • I'm still shy and introvert but I try to be more open during performances, and actually it comes naturally with more practice
CYFERDYNE • if Neuroticfish asked us to put something together, we definitely wouldn’t say no. We’re such huge fans!!!
LISA MORGENSTERN • I also sing about nicer topics when they overwhelm me, but mostly they don't.