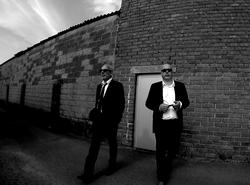 Do you have to be an innovator when making nice music? See it this way: the one who invented the first wheel was a very smart guy, the inventor of the second wheel was a genius.

Good Morning To Myself is another Belgian album that is released on Starman Records. The creator of this gem is Soul Embrace: a collective of musicians that is seeking its inspiration in the likes of Roxy Music and Morphine. Peek-A-Boo spoke with singer Alain Delterne.

Soul Embrace is not exactly fun for a reviewer, because you discover thousands of styles. How would you describe it yourself?
Soul Embrace is primarily the brainchild of Peter Verbauwen, he wrote all the songs and has dozens of others ready. The rest of the group consists of a mishmash of people that mostly makes music, but also videos, paintings and collages. They write stories, they’re acting, they’re editing or producing something. That somewhat explains the many styles. It's a kind of coincidental collective of friends in which each of us can express his passion. And so we want it to be: being creative in many ways. Soul Embrace is, as we say so ourselves: music for movies that were never made. But one day we will make those movies.

I consider your sound as unique in Flanders. I do not hear musicians who want to be hip, but simply do what they want to do and sometimes they’re confronting the mass generation, right?
Thank you. He who wants to be hip is wrong anyway. Indeed, we are just ourselves and if the mass generation doesn’t want that, then that’s good, but we certainly do that intentionally. Too many people today are "culturally lazy”. They listen and watch whatever they get without looking for the origin or the history. They don’t want to hear the thousands of gems that you rarely hear on the radio. I am deeply sorry that the Belgian radio shows have so little interest and don't support what is happening musically over here.

I hope you want to answer the following questions after saying this. You don’t seem to be very young, what is your musical past?
Allow us first to park our walker. Age has nothing to do with it, look at the Rolling Stones, Seasick Steve, the much too soon deceased BB King and hundreds of other great old rascals. Passion has no age. For us there are only two kinds of music: good and bad. What we do is listen to the first kind since decades. Each of us plays or has played in bands with many genres: from wave to electro, from soul to metal. That gives us some opportunities and a lot of inspiration.

How are the reactions to Soul Embrace?
The album sells good, but it always can be better. The critical acclaim is good, and that alone makes it all worthwhile. Everyone loves to get some recognition, but just as so many groups nowadays, we suffer of the phenomenon 'unknown is unloved'. On this CD there are without any doubt some songs that deserve radio coverage. Without wanting to sound arrogant, there are tracks included that you can sing along with your sunglasses on, after hearing them once. I've seen people do it, and that's great to see.

I guess it will be me, but I associate Soul Embrace with bars where there’s a lot of smoke, where you can drink yourself to death and that is crowded with many beautiful women. No, I mean Soul Embrace is the ideal sex, drugs and rock 'n roll, right?
Nail on the head. Suffocating Love, Trying To Hold On and My Woman certainly fall into that category. In all honesty, we would love to make a music video with pole dancing female beauties in smoky bars. From a reliable source I know that clip is coming. But maybe we will put a fanfare in someone’s bathroom, or make a horror video. It can come from all sides. Much depends on the mood of the listener and that makes the CD so versatile. Having said that, I miss smoky bars. An atmosphere that you rarely find in today's nightlife. The reason is probably not the cigarettes, and yet again it might be, though.

I found the title of your album pretty funny. Good Morning To Myself. That sounds pretty cynical. Explain!
That sentence is from the song Die A Happy Man. You can endlessly philosophy about it. Is it self-love, the lack of empathy in today's society, criticizing the philistinism, or an indictment of "the American way of life ' that has a breakthrough over here as well. Maybe you're just getting out of bed with the right mood and you wave a goodbye at yourself in the mirror. Or it is just a nice phrase that is meaningless. To you, the listener, to choose!

Your single is named Tarantino Cool. Why Tarantino?
The love/hate relationship with Quentin already caused many discussions in our band. Yes, Reservoir Dogs, Pulp Fiction and Kill Bill are masterpieces and the protagonists are usually cool as a cucumber in a freezer. But the man has stolen so many ideas from others without giving them credit, that he should be ashamed of it. Perhaps this sentence is more cynical than Good Morning To Myself. However, a black suit, black tie and sunglasses are pretty damn cool. Just ask Roy Orbison, Johnny Cash, Mr. White, The Men in Black or The Blues Brothers.

In fact, you don’t hide your influences. I suppose you've had it with bands that claimed having invented hot water, not?
In many reviews we have been compared to Rolling Stones, Morphine, Roxy Music, Blue Blot and many others. That of course is very nice to hear, but many groups and artists are seen as the new this or the new that. That sometimes upsets artists as they want to be themselves. We are the new Soul Embrace. We did not invent the hot water, but you can make tea from it or take a bath in it. Do you have to be an innovator when making nice music? See it this way: the one who invented the first wheel was a very smart guy, the inventor of the second wheel was a genius. Don’t forget the nod.

Something about Starman Records, it is the Belgian label for bands that want something different than the usual radio fodder. How did you land up there?
Starman Records is a label that deserves eternal fame and a lot more attention in almost all media, even though the written press adores label boss Felix Huybrechts. You have to be a daredevil to release 65 records with the best Belgian music in just three years, in an era where digital has become a synonym for free, from the sublime Isle of Men to Freckleface, or Ferre Grignard and the legendary Lavvi Ebbel. Someone told him recently that he is the new guardian of our national musical heritage. I fully agree. It was a huge honor for us that he wanted to release Soul Embrace. And how did we get there? The man also plays bass, he makes hilarious promo trailers and he is also an incredibly nice man. It was a match made in heaven.

What about gigs?
We would love to, but each of us works full time and as you pointed out yourself, we're just too old to be our own roadies. We'll see how it evolves, meanwhile we especially try to expand our repertoire and we go to bed on time.

What's your favorite record of all time and why?
Interesting question, but we do not have an answer as it depends on emotion, mood or situation. We do not think artists can’t do anything wrong, or just have sublime records. Prince also made absurdities, The Beatles, ZZ Top or Bill Laswell as well. But to give you a kind of answer: Graceland, Sign Of The Times, My Life In The Bush Of Ghosts, Little Village, Rumors, The Healer, The Complete Stax Volt Recordings, Atlantic Rhythm and Blues... Name one album? I can’t.

With whom you wouldn’t care to be in an elevator for 8 hours and what would you do then?
You better ask the whole group, but I am personally fascinated by black musicians. Especially what they experienced when they were invited to play in a hotel, but were not allowed to stay there or slip in through the front door because of the segregation in the United States. So, I would choose the late B.B.King. Not only because he is one of the best blues musicians, but also because he’s an incredibly kind man. Put me in the elevator with him and I want to hear his entire life from A to Z.

Why should Peek-A-Boo readers check out Soul Embrace?
Because Peek-A-Boo readers are curious people who are inherently smarter than others. As there is something on this CD for everyone. Because we like to make a second CD and because we hope that our radio stations give us the airplay we deserve, and that’s said without wanting to sound arrogant.

AHRAYEPH • I'm just doing what all good musicians try to do, which is to surpass what they've done before.
BLACK LIGHT ASCENSION • I literally just can’t understand how people can ignore such obvious realities as the accelerating and irreversible destruction of the place in which we live.
RABIA SORDA • So when it comes to play music for others I give them the Erk’s treatment for total madness!
IAMX • After my dark period it was easy to write lyrics for my songs. In that way it was a blessing.
UNITED AND IDENTIFIED • United & Identified shortens nicely to You & I (U & I). The idea behind this is that we are all united, yet unique and identifiable.
GHOSTS IN THE GRAVEYARD • I like to call it Electronic Shock Rock. We have a retro sound, and a theatrical quality, with a strong horror influence. Every word has meaning, every song tells a story, and it all ties together
ARBEID ADELT! • The good old days don’t exist, never!
DOUBLE EYELID • As a listener I’ve always been drawn to ‘difficult’ stuff, that’s the space where I’m at home.
TRACER • I usually do not give much explanation to the lyrics, I do not want everything to be ready-made
STATIC DAYDREAM • I'd be doing myself and our fans a disservice if I changed what I do, simply based on fear of critics or something. I just try to make music that I'd like to hear.