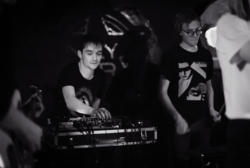 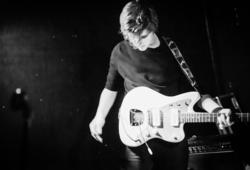 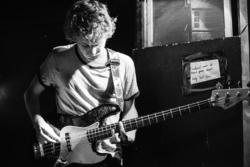 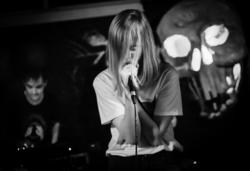 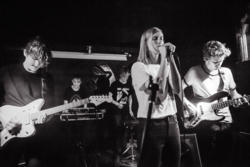 We are convinced that post-punk is still relevant for our generation and we try to prove that!

Personally, I always doubted whether love at first sight exists, but in the case of Whispering Sons it certainly does! And no, it's not only me, as anyone who saw this young Belgian band, is deeply impressed by their cold wave sound that sounds like the bastard child of The Cure and Nico. Recently their cassette Endless Party was released on Wool -E Tapes.

I’m sure you know it yourself, but your sound is quite unique in Flanders. How were the reactions so far?
Generally positive. For us, even surprisingly positive. We kind of expected that post-punk and new wave fans would love our sound, but also people who are not involved in these genres seem to be impressed. That gives us an immense pleasure.

It is obvious that you have an 80's cold wave sound. Solve the mystery: how is it possible that young people are influenced by such music that today you can’t be heard anywhere!
What’s the reason? I think it’s just because we belong to a generation of young people who hear 80' music because that was the age when our parents were going out. From the moment a young teenager hears bands like Editors and White Lies and starts digging where their sound comes from, then he immediately will hear bands like Talk Talk, Joy Division, The Chameleons, The Sound, Siouxsie And The Banshees, Cocteau Twins and... And then there's no turning back!

The internet plays a major role in today's post-punk revival. Music is much more accessible now. We always are one click away from the best of the 60s, 70s and 80s. Before the rise of the internet an obscure band like The Sound could release as many magnificent albums as it wanted, there always was a risk that no one would ever listen to them. Today all their albums are on YouTube and people listen to them!

You took part in Humo’s Rock Rally (a famous Belgian rock contest-ed.). Can you say some things about that? Any positive or negative experiences?
Recently we were selected for Humo's Rock Rally. The preliminaries soon arrive (29th January, come and see us!), so we have no experiences yet. But we know where the confusion comes from as we won indeed a contest with almost the same name: the Rock Race. That is a provincial equivalent of the Rock Rally for students from Brussels. We participated just for fun, and honestly we didn’t expect to get far. After our first gigs in the preliminaries, we suddenly received praise from both the public and the jury, which was the point for us to go ahead.
Eventually, we won and played at the stage of the AB (huge venue in Brussels-ed.) and in that period, we wrote our best songs. So in the end, the final definitely was unexpected and it was a very positive experience. Brussels and Flanders still like the taste of dark music and that feels good.

After you demo, you got the attention of Wool -E Tapes. How did this collaboration start?
Gosh, at the end of 2014 we recorded the song Midlife and we posted it on YouTube. The song had several hits and some positive reactions. A while later, we received an email from Dimitri of Wool -E tapes who asked us if we were interested in releasing something on his label. We had plans to make an EP around March 2014, but then Rock Race threw a spanner in the works. Not that it was so bad, because of Rock Race we wrote some new songs in the summer of 2015 that renewed our courage and we’re quite pleased with the result. When we contacted Dimitri again in October with our EP, he immediately was enthusiastic. A collaboration we don’t regret!

You really can be proud of Endless Party. However, you can’t say it sounds cheerful, the melancholy is dripping from every note. Do you consider yourselves as dark souls?
Sander H: In one way or another, I always was attracted to the dark side of music, literature or film. I think this is a result of a rather cynical worldview I have. When I look at today’s world, I see little reason to maintain an artificial happy culture.Of course tape releases are something for melancholic souls, but apparently for younger people too.

When I recently interviewed The Mary Hart Attack, they praised tapes too. What does this format mean for you?
It is true that nowadays tapes are designed for a specific audience and not everyone has a tape deck at home. However, it is a very distinctive and interesting medium. The people who say we’re crazy because Endless Party is released on cassette, should listen to that tape, there really is an audible difference between the digital version and the tape.

Back to the music. Fenne’s voice really blew me away. It seems like you’re lost in your own world, Fenne, and your Nico-like voice surely makes Whispering Sons darker…
Indeed, it doesn’t make the sound any happier. But that is just my way of singing, not that the lyrics are fun stories. Gigs work confrontational as a lot of frustrations and emotions come up then. Singing onstage is my outlet.

Whispering Sons probably will be categorized as post-punk, but you're not just another band that wants to sound like Editors. What do you think of all these hip bands that barely are a glimpse of their idols?
Personally, we grew up with the music of Editors or Interpol. Without them, perhaps we never would have heard post-punk. On the other hand, you see that those bands sound more and more pop on each album. If you listen to their previous releases or demos, you really hear authentic post-punk, but somewhere between the fame and the search for their own sound, they developed something that will appeal to the masses, and that's a pity!

Time for a nasty question. You are young, but your musical style is worshiped by a much older audience. How does that feel?
On the one hand we are very happy with that, because these people experienced the heyday of our favorite music, and it is an incredible compliment that they love us. That means we're doing well.
On the other hand, it is also our mission to bring our music to a younger audience, and that doesn’t mean that we have to be radio friendly. We are convinced that post-punk is still relevant for our generation and we try to prove that!

Another tricky question. Many music lovers adore you, but at the same time they’re afraid that one day you will be discovered by the big sharks who will kill (just like many others) your spontaneity.
Frankly, Whispering Sons is just a bunch of friends with a love for dark music. And yes, we decided to make music in a band. We always will write music that we like to play ourselves. We do not know which direction yet, but one thing is certain: we will always write music for ourselves. That's our ethos. Too bad for those 'big sharks'.

What are your plans?
Currently we try to play as many gigs as possible to promote Endless Party. Playing gigs is still what we love to do. There's nothing better than the experience of being on stage. And if we see that people appreciate our music, then it’s even better. We would be very happy to play at some festivals this summer. Since our teenage years we visit all kinds of festivals and it would be great to stand on the podium once, rather than standing before it! In the long term we aim to record an entire album. Endless Party was a step in the right direction with its 30 minutes. But then again, we’re talking about the future…

Let's conclude with some fun questions. You can go on a world tour, but you have to choose between U2 and Chameleons Vox. Who will it be, and why?
Chameleons Vox, no doubt. Why? Mark Burgess!

What is the best Belgian album ever (Whispering Sons does not count as an answer!)?
That would be a good question for Dimitri, because we are no specialists on Belgian releases.

With whom would you not mind to be in an elevator for eight hours and what would you do?
Kobe and H. Sander would like to spend eight hours with Robert Smith in an elevator. There is definitely some time to listen to Pornography, so the hatred for elevators can disappear. We probably will talk about the value of black hair dye and the best mascara for a three hours gig. Robert surely will know such things.

Why should people listen to Whispering Sons?
We make a dark soundtrack for dark times.

HARBOUR OF SOULS • We always try to make a heavy metal party, and we do not know the meaning of subtlety.
LIV KRISTINE • Sometimes bad things lead to good things.
TRAILERS • We hear the most diverse bands if people compare us with others!
END OF THE DREAM • Netherlands is of course our territory, but it is indeed our intention to go international.
TEMPTATIONS FOR THE WEAK • Concerts are very important for us, when the audience is having a good time, then we’re happy too and we try to make it even better!
VITA NOCTIS • We always want to do our best, but the spontaneous character is important too. We immediately feel a click, or don't...
THE GURU GURU • The story of The Guru Guru has become originality, creativity and a close friendship that is indestructible.
SIMI NAH • I've been looking for the woman inside of me since 2004 and I haven't found it yet, so maybe I will in 2016!
TREPANERINGSRITUALEN • Religion is poison. It's dogma, and dogma is the death of the soul.
YTHON • The metal genre is not trend or time-sensitive and is far from being extinct.!

Other reviews from WHISPERING SONS
WHISPERING SONS • Playing live on stage is the reason why we love what we do...
WHISPERING SONS • Whispering Sons is a young blonde woman who exorcises her demons on a stage, accompanied by a dark and often danceable soundtrack made by passionate musicians.