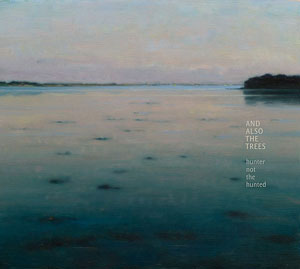 AND ALSO THE TREES

Hunter Not The Hunted

Never judge a book by its cover, they said, but then again some images just speak louder than words and that's exactly what can be said about the already 12th album by Worcestershires's finest.

It's kind of difficult to imagine that this band has been around since 1979 and of course a lot has changed since the days they were discovered by The Cure. Even if AATT, as they're named by their fans, never had the chance to get the full recognition, they have developed their own sound and have been worshipped by fans all over the globe.

But this was then and this is now, and of course the newest offering by AATT has nothing in common with classic albums such as "Farewell To The Shade" or "The Millpond Years", apart of course from the intimist voice from singer Simon Huw Jones and those Cocteau Twinsesque guitarlines from Justin Jones which have always been the main ingredients of their sound.

This album offers you 13 intimist songs that make you feel like you're alone on the ocean with waves and dreams as only company. Having said that, I always regret their previous mature sound but then again it's their choice, not? And it's an album that nonetheless deserves your attention and I guess after struggling for 30 years, one deserve some recognition, don't you think?

A tip? It depends on your tastes, but this album is definitely a must! Try it, you might fall in love.