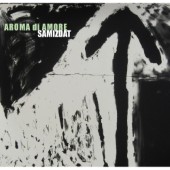 It took me some time before this new album got me hooked. Aroma di Amore has changed a bit over the years and where the harder and rougher songs caught me back than, well now I'm captured by the more intimate songs. More than 75% of this album are more intimate songs, so yes: I'm hooked again.

The lyrics didn't change: still well thought and worked out. It takes, sometimes, a bit longer before you get the point of the song, but that's the nice thing about this band. I love the more scary and spooky sound of the softer songs. It's not for nothing that these songs are my favourites on this album: 'Schoenen', 'Hunker', 'Nu we allemaal alleen zijn', 'Het land is moe', 'Kom terug' and the very sad but most beatiful song 'Nu we allemaal bijeen zijn'. A song to remember and that most of us already know is 'Hoor hoe weent mijn ziel', a very catchy song. A very typical Aroma di Amore song is the last one 'Het is mijn ik', but with a new sound, almost trip hop. And for the fans 'Stront' is the most heavy song on the album, shit man!

Can't wait to see them on stage at the Shadowplay Festival!