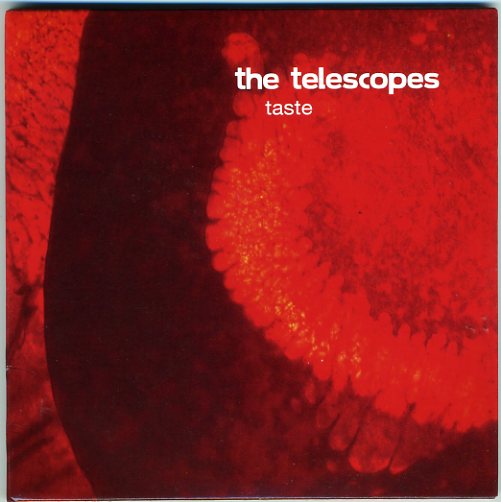 Anyone who grew up in the beginning of the 90's will probably have heard of bands like Jesus And The Mary Chain, My Bloody Valentine and Ride. It marked the start of another new genre called shoegaze, and Ride's habbit of staring at their own feet during an entire show defined that style of music. Stuck up you might think but when you hear Ride's seminal album "Nowhere", you'll understand that's the best way of expressing the feelings they evoke with their feedback loaded psychedelic rock.

The Telescopes started a year earlier and "Taste" is their first album. You'll hear a mixture of Mary Chain and Bloody Valentine, but their songs are much shorter. So it sounds a lot faster like a proto punk version of these bands. Imagine The Stooges or T. Rex going wild on feedback, add to this the charismatic voice of Stephen Lawrie plus some plain good songwriting and this is another re-issue that makes me wonder how I never got to know these guys.

Today, they are still very much alive, but now it's only Stephen and new addition Bridget Hayden. Their last album, 2008's Infinite Suns is experimental noise and uses a lot more electronics. They still play live and were chosen by Portishead to play at the All Tomorrow Parties festival they curated in 2011. Doing a tour in the US now, they'll also play in Madrid on the 9th of May...

But anyway, "Taste" is a good album!