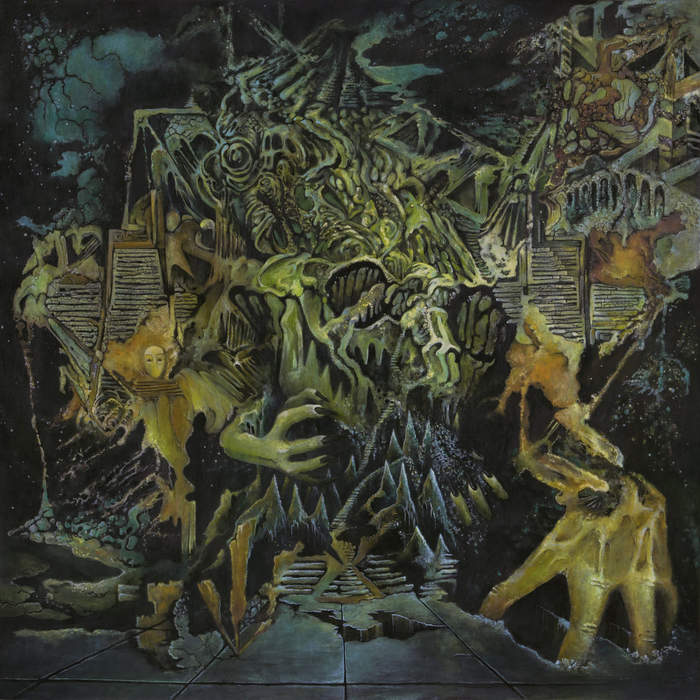 KING GIZZARD AND THE LIZARD WIZARD

Murder Of The Universe

Melbourne’s King Gizzard And The Lizard Wizard are a band with a seemingly infinite creative output. So much so that on their previous albums, they had to play around with self-imposed restrictions (an album that plays as an infinite loop, songs that are all 10:10 long, using only acoustic or microtonal instruments, etc.) to channel their prolific tendencies.

Continuing down this path, Murder Of The Universe is the second instalment in the band’s latest challenge, which is to release five albums in 2017. Under such a pressure to produce material, you could be excused for being sceptical as to the quality of the albums that will be coming out this year. And very fortunately, your doubt would be ill conceived as Mackenzie and co have managed to put out one of their best and most fun albums yet.

Murder Of The Universe is a collection of 3 unrelated and bizarre tales that are developed in an almost cinematographic way through the use of recurring musical themes and narration courtesy of Leah Senior, a folk artist from Melbourne. The first story entitled “The Tale Of The Altered Beast” recounts a human’s encounter with a bloodthirsty, and murderous Altered Beast. The human becomes progressively more interested in the idea of becoming altered and is ultimately absorbed by the beast to form an even stronger Altered Beast. The chapter begins with a first iteration of the Altered Beast theme, akin to the way composers develop musical themes in movies. The intro features a droney bass and prepares the listener for the epic ride ahead. The band quickly plunges into Altered Beast I and it is instantly clear that this album is nothing like Flying Microtonal Banana, released earlier this year. The guitars are fuzzy and the riffs are heavy, gritty and fast-paced. There are demented, unsettling sounds all around and the time signatures are all over the place. These odd-time signatures allow the band’s two drummers to play with one another to great effect, something that I did not think was exploited enough in the band’s previous releases. KGATLW do a fantastic job at using the music to enhance the story by, for example, changing key signatures when different characters are talking or using eerie sounds to convey the human’s fear in the face of the Altered Beast. As the character gets closer and closer to the beast, the riffs become slower and heavier. This builds up until the human is absorbed, at which point all instruments drop out one by one. The beast then comes back stronger than before and the band closes the first chapter with a massive reiteration of the Altered Beast theme.

The album’s second chapter tells the story of the Lord of Lightning’s battle with the Balrog, a creature that it accidentally creates while electrocuting a man on a chair. The chapter begins with a riff from “People-Vultures” from the band’s 2016 album Nonagon Infinity, one of a number of throwbacks to this album featured in this story. Musically, the chapter is a lot more straightforward with a 70s rock feel and instances where you would think you were hearing Sid Vicious making his 2017 comeback. The story ends with an epic battle introduced by tribal drums, once again played in odd time signatures.

The stage is set for the album’s third, and arguably strangest chapter: “Han-Tyumi and the Murder of The Universe”. To summarise this briefly, we meet Han-Tyumi, a cyborg who was the last human to ever feel and whose last two wishes are to die and to vomit. He builds a vomit machine that malfunctions and goes out of control, eventually drowning the entire universe in bile, thereby destroying it (Murder Of The Universe). The story sounds ludicrous, yet, the band’s commitment to it and the quality of the music make it so that you cannot help but find the cyborg’s monologues compelling and heartfelt. The music in this chapter begins with a spacey feel to build the futuristic stage we find ourselves in, but the band quickly get back to business as usual with a fast-paced straight-forward riff. Similarities to the Sex Pistols are still present here and are especially striking when you hear Stu singing “Despondent, lugubrious, no future” on Digital Black. As the story progresses, Middle Eastern-sounding guitar lines are introduced and used to great effect. As the vomit machine malfunctions and bile covers the universe, these become more prominent. The music progressively turns heavier and increasingly cacophonous in order to reflect the darkness and chaos descending upon the world until the universe eventually dies.


On paper, Murder Of The Universe sounds ridiculous and implausible, but the fact that King Gizzard And The Lizard Wizard can make something like this work is a testament to their vision and the quality of their musicianship. They are one of the top bands in the scene right now and there is simply no one making music like them. I didn’t think I’d ever say this but hell yes, I’m definitely ready for three more albums from these guys this year.