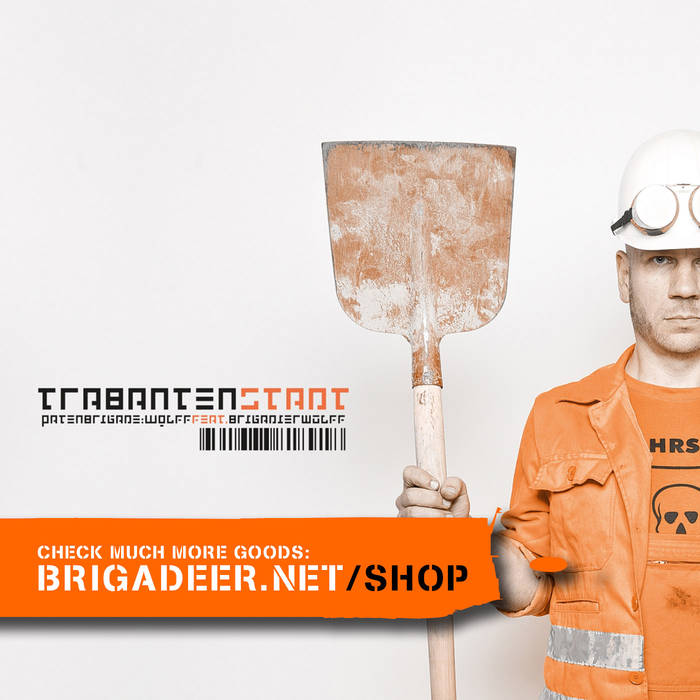 What do you expect from The German project Patenbrigade: Wolff? The guys from Berlin are known for their construction-workers outfits and an unbending electro ambient music. Wayward and haunting. And that’s exactly what you get this summer! The new album Trabantenstadt is out on June 17th and comes as an 8-track release.

So, let’s talk about this record: first of all I need to warn you! I usually try to remain close to the music only. Trabantenstadt forced me to go more into the historical and technical details of the wide range of subjects offered here than ever before. Not only because curiosity is one of my personal pet issues, but mainly because without my investigations you will surely enjoy the music. But I guess the background knowledge will make this CD a wonderful and special experience for your ears and most of all for your heart and your mind! Fasten your seat belts and join this adventure!

TU-144 is the name of the opener. And who knows what TU-144 means? It was the first commercial supersonic transport aircraft designed by the Russian Tupolev bureau. So what has this to do with Patenbrigade: Wolff? Fast beats – simple but catchy and infectious !

Track 1 speeds the album up to maximum speed and brings you immediately to the nearest train station where your train Baureihe VT 1816, or better track 2, is waiting for you. The Trans Socialism Express is a high-speed train from the former German Democratic Republic. The train rushes in, so please, mind the gap! – Vorsicht an der Bahnsteigkante! The ecstatic rhythm of this song and the inklings of the sounds of a train make you hungery for more of this travel through time.

Track 3 is called Sputnik. Sputnik was the first artificial earth satellite launched into space by the former Soviet Union. The song is slower and more robotic and it creates the perfect illusion of weightlessness in space in a satellite circling the Earth.

Aurora. Aurora was one of three Pallada-class cruisers, ships built in St. Petersburg for service in the Pacific. One of the first incidents of the October Revolution in Russia took place on the cruiser Aurora. Track 4 is the perfect chill-out song. Floating on air, ups and downs come and go. Close your eyes and let the magic levitate you.

Track 5, Ikarus, keeps you up in the air. Ikarus is part of the ancient Greek mythology. He and his father tried to escape the island of Crete but finding the right balance between not flying too low and not too high was a task too heavy for Ikarus and at the end he failed and crashed. The song is quite threatening. Awkward and slow beats. Purely instrumental. But it finds the balance Ikarus was looking for.

Energija Buran takes us back to space. The Russian project of the 1970s was originated to compete with the US American space shuttle. The shuttle Buran was the first unmanned orbitor to fly in automatic mode all the time from takeoff to landing. The launcher Energija with its 8 booster rockets tosses us into other spheres dominated by technoid beats and distorted vocals. Somehow you get lost in this world of space travel.

But what’s our destination? It’s the Moon – and the two outro tracks Lunochod I and Lunochod II give us an insight into a world so different from ours but still so essential for the human existence. The two Soviet lunar rovers release you to your terrestrial lives.

And slowly the signals fade…

Trabantenstadt. Satellite town. Modern urban planning or maybe something else?

Honestly I’m going to leave you to yourself with my thoughts and explanations on that extraordinary piece of music! Only one more sentence: Trabantenstadt will light up the dark sky of electronic music with its matchless singularity!