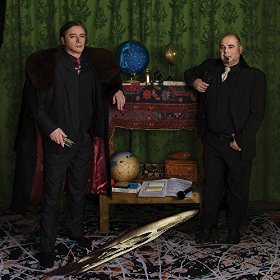 Familiar to audiences of Lydia Lunch, Nick Cave and the Bad Seeds and Einstürzende Neubaten, Italian Teardo and German Bargeld's previous musical legacy has already hovered around the dramatic, the theatrical and the ritualistic. For Nerissimo, which translates from Italian as 'blackness' and is the duo's third collaboration, they explore personal themes, mortality, religious imagery and more in German, English and Italian.

Buoyed by orchestration, delicate arrangements and pin-sharp production, Nerissimo's appeal lies more in its music than its lyrics or intentions. The Beast is as pretty and elegiac as it gets, a gently eddying stream of rhythmic bass synth and weeping strings and a recurring "I'll make it through..." motif, while the beatless The Empty Boat reminds me of Tuxedomoon at their most restrained. It's a pity the second half of Nerissimo drags things out a little more than required, until we're treated to an Italian version of the title-track as the album's closer. Without resorting to drums to propel the songs along or engaging in too much studio trickery, Teardo and Bargeld have created something of a slow burner, an album to quietly savour.