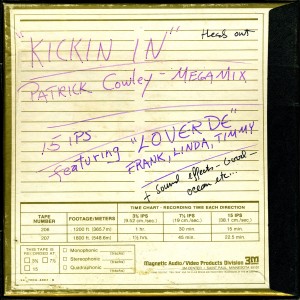 And now something completely different! If you’re old (or just have a great taste in disco) then you might remember Patrick Cowley’s monster hit Do You Wanna Funk? with Sylvester. In fact, Cowley was a vast musician on Sylvester’s records and he was also the creator of the synthetic beats in that other smashing hit: You Make Me Feel (Mighty Real).

Cowley labelled his own tunes as Hi-NRG dance music and in the late 70s/early 80s he was the most important DJ in San Francisco, especially in the gay scene. His works are often compared to the godlike Giorgio Moroder, and if not, then Cowley is surely just like Moroder one of the basic stones of American disco.

Cowley died in 1982 at the age of 32 and he was one of the first AIDS victims. Years after his death, tapes were found with unreleased records. This 12”inch is one of those. The 12 minutes long Kickin’ In is recorded with Loverde who had hits with Die Hard Lover and My World Is Empty Without You, and also died of AIDS.

This lost recording of 1978 is now again available on a 12”inch, a collaboration between Dark Entries and Honey Soundsystem. There are three tracks on this one, with a repetitive style, but with such a strong chorus that it never bores. Even 12 minutes is just too short!