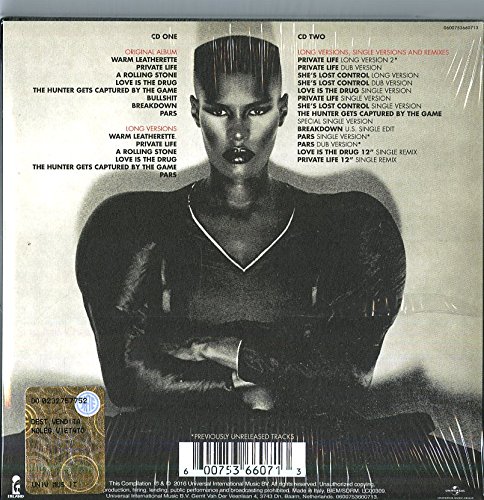 Somewhat perversely, Grace Jones' first key crossover album appears as a reissue after the early years compendium Disco and the landmark set Nightclubbing. But given the recent publication of her autobiography I'll Never Write My Memoirs, the timing couldn't be better.

Warm Leatherette marks the beginning of arguably Jones' most creative and lucrative era, the celebrated Compass Point trilogy that ended with the equally essential Living My Life (which surely has to be the next release in this reissue program. Having knocked out three straight disco albums of varying quality, the fashionable diva clearly needed a switch in fortune and direction.

Under the suggestion of Island's Chris Blackwell, hooking up with the likes of musicians Sly and Robbie, Barry Reynolds and Wally Badarou was something of a master-stroke. The recording project was steered by crack producer of the time Alex Sadkin who had previously worked with Bob Marley and the Wailers and Third World and who went on to transform works by Duran Duran, Thompson Twins and Paul Haig into radio-friendly pop starlets (well, it worked for two of them). He and the enviable gaggle of players present created the perfect exotic aural backdrop for this potent mix of covers and two originals.

Whilst not exactly the funk-heavy rhythm machine showcased on Nightclubbing and Living My Life, parts of Warm Leatherette still manage to groove. Chrissie Hynde's sardonic Private Life is the big hit here and sports some serious percussion work, while Daniel Miller's twisted electro-punk anthem Warm Leatherette is mutated into a streetwalking hip-disco smash. You get various versions of both songs, as indeed you do with less-celebrated album tracks such as Jacques Higelin's elegiac Pars (nice rare dub included), Tom Petty's Breakdown (the single edit works best) and forgotten MOR single Rolling Stone (extended), one of only two originals here (the other being Reynolds' dismissive Bullshit).

Perhaps the divisive choice of song was Joy Division's She's Lost Control, the original flip of the Private Life single and presented here in extended, edited and dub versions. Then as now, choosing source material from the seemingly untouchable or iconic was a brave move - if you who remember Paul Young's thudding retake on Love Will Tear Us Apart, you'll nod in agreement. If you are unfamiliar with the Grace take on new wave classics, you may baulk at the prospect of a bubbling reggae take on a song about epilepsy. But fear not - ease yourself in with the edited version and all becomes clear. The lyrics could almost be about the notoriously fiery Jones temper.

Most tracks previously appeared on the 1998 Compass Point Sessions CD but you get a few hard-to-find gems to boot, a sizeable essay and a natty tactile faux leather box to caress during playback.

As a standalone album at the time, 1980's Warm Leatherette was a brave, confident transitional toe in the ocean for a performer at a crossroads in her career. Although Nightclubbing, Living My Life and the most recent Hurricane albums fare better after repeated listens, Warm Leatherette remains a must-have headstrong piece in the Grace Jones jigsaw.