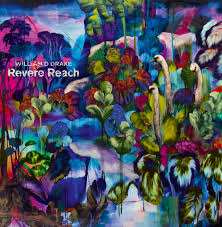 The former Cardiacs keyboard-wielding eccentric Drake boasts a legacy that already harbours plenty of vivid imagery - with Revere Reach, he's lobbed his own rule-book out of the nearest studio window and embarked on an Alice-in-Wonderland type travelogue through more styles than you shake a tree stump at. English music hall, theatre and animated lyricism abounds, the whole experience reminds me of The Horne Section, Reeves and Mortimer, Monty Python, The Divine Comedy, end of the pier amusements, Chipperfields Circus and the man's previous band. Some of it stomp, some of it swings, some of it ebbs away quietly and much of it confounds and pleases in equal measure. Head to Distant Buzzing, Heart of Oak and Castaway for a summary of Drake's quirky bonhomie.