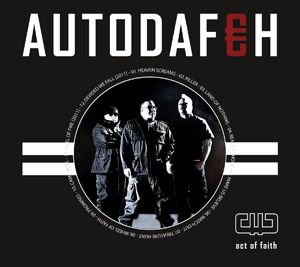 According to the promosheet that goes with it, the Swedish trio Autodafeh are making EBM like it was meant to be.
This third album seems to be their tour de force as it seems that "Act Of Faith" is meant to target a much wider audience and this can help due to the fact that this new work will be released in Europe throughout the Dark Dimensions group.

So far the band were welcome guests at underground events such as the Belgian BIM festival but "Act Of Faith" certainly aims higher and so it happens that their usual straightforward EBM songs make room for more accesible electronic chants that are clearly lifted from the immense Front 242 backcatalogue.

Just check out "Treasure Hunt" and you know why we're mentioning Front 242. Anyway, The Beatles have been copied a million times so I have nothing against thousands of 242 clones, certainly not if they can make memorable anthems and that's what "Act Of Faith" is.

Play it, say, 4 or 5 times and there's nothing you can do as you're simply hooked. Ten classic EBM-tracks that are meant to let your body sweat. What more do you want? Perhaps two nice additions that come with reworked versions from older classics like "Divided We Fall" and the sublime "Fuel Of Fire".

"Act Of Faith" is not a classic but it tributes them and that is in 2011 already a rare thing and so to be checked out by all EBM-addicts!

Next reviews
THE OPEN UP AND BLEEDS • An act of love and violence
HECQ • Avenger
MASCHINENFEST 2K11 • Or how to destroy your senses in a few days time...
SYNAPSCAPE • Traits
ZARTBITTER 16 • Richtung Zukunft
MODERN ART • Circuit Lights 1982-1986
DEZ MONA • Saga
RELLA THE WOODCUTTER • I know when it's time to get the fuck away
VARIOUS ARTISTS • Label Noir Vol.1
SHINY DARKNESS • Lighthouse