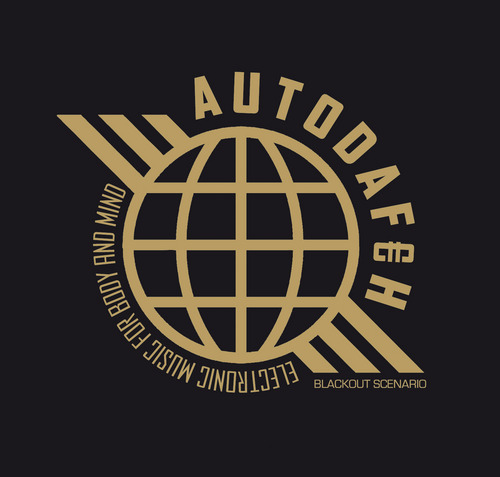 Starting in 2007, Autodafeh are part of the old school EBM revival. They used to work with Sigsaly Transmissions but for their fourth album they made the shift to Scanner, a label not unknown with most EBM folk. Other bands on Scanner are Absurd Minds, Spetsnaz, Centhron and for a short while also The Eternal Afflict.

So you can expect some heavy boot stompin and sweatin bodies on the dancefloor when you hear any of Autodafeh's songs. They take a lot of ingredients from bands like Front 242 and Nitzer Ebb, complete with analog sounds. But they also show us a new side with synthpop dreamsong "The Pain That We Feel".

The album is a bit inconsistent though, songs like "Claustrophobia", "Bloody Mary" and "The Shadow" have far fetched lyrics that annoy quickly. There are enough highlights however, I really love the Nitzer Ebb sound of songs like "Step Up" and "Lessons To Learn". "Exercise Your Brain" is a good opener, setting the right mood immediately and it continues with "Getaway".

A lengthy album, maybe chucking a few songs overboard would benefit the overall experience. But still, if you like EBM, good beats and catchy melodies with straightforward lyrics, this is the stuff for you. My favorite remains "Hunt For Glory" though...

Part of the big old school EBM re-appearrance, Autodafeh started in 2007 and this is already their fourth album. They moved from Sigsaly to Scanner, a label most EBM lovers will know from bands like Spetsnaz, Absurd Minds and for a short time The Eternal Afflict. As we can expect, there's no change in style, it's still blood pumpin 'n sweat drippin EBM! Lyrics are straightforward, sloganesque and mostly meaningless, but they get you in exactly the right mood so that's great! "Exercise Your Brain", "Getaway" and "Emerging Sadness" are pretty compelling and worth a little shuffle in my room. "Claustrophobia" has it's moment but the lyrics are a bit rediculous... It all gets a lot better with "Flow", a good melody and variations in tempo bring the needed magic. Then they even get a bit mellow with the synthpop hit "The Pain That We Feel". I love the analog sound of the melody and the hissing vocals. They show a new side of themselves and it's a success! From now on, the album races on with one highlight after another, do check "Step Up" and ever more "Lessons To Learn", with shouted vocals that could come from Nitzer Ebb. Too bad about lowpoints like "Bloody Mary" or "Shadow". A bit inconsistent but still enough beats 'n shouts to keep your feet happy.