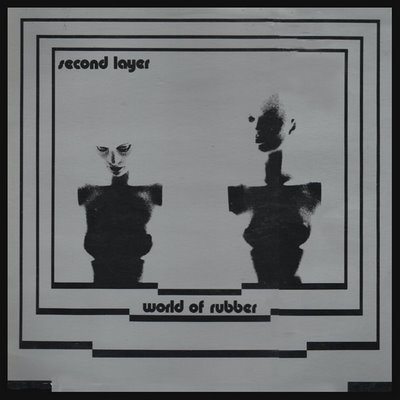 Primarily a side-project founded by The Sound's Adrian Borland and Graham Bailey, Second Layer produced just the one album between them (this one), plus a couple of earlier rare singles. World Of Rubber bears all the hallmarks of typically early Cherry Red acts from the bedsits, such as Five Or Six or Joe Crow, as well as The Sound's usual gritty yet heartfelt post-punk heritage already being formulated full-time.

Sound-wise, World Of Rubber makes The Sound deadringers for Bananarama - this is intense stuff, the music of sleepless nights, street-walking into the early hours, the breakdown of modern utopian society and strained relationships. Hollow, echoey drum-machines propel scratchy discordant guitar riffs and disaffected vocals like swarms of irritable insects, with occasional forays into no-disco (Under The Glass recalls Cabaret Voltaire's Red Mecca period), brutalist electro-indie (Zero) and sensory overload (In Bits is an unsettling jarring experience), right through to the funereal (Black Flowers) at the close of the album.

Borland and Bailey's soundscape is rugged, craggy, scabrous and ill-fitting during a time when New Romantics were rearing their coiffured heads and British heavy-metallers were swishing their long locks in beer-soaked mosh-pits. For those that would seek solace in the murky underground of DIY post-punk and innovative emotional releases issued by the likes of Factory, Rough Trade, 4AD, Cherry Red (who originally released this in 1981 and again on CD in 2007) and New Hormones, you could have done worse than have swept this into your collection.