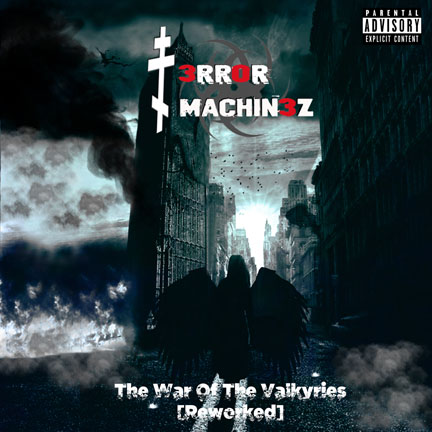 The War Of The Valkyries (Reworked)

Only five years into their career, the Italian based T-Error Machinez have delivered an album based on a dystopian nightmare and it is deliciously demonic A concept album themed with Industrial Gothic horror, ‘The War Of The Valkyrie(Reworked)’ tells tales through sections of fantasy that in modern society hits the very raw nerve of our own mortality and the people in power who control it.

The three-piece band consisting of Manuel Curti, Diego Porto Bonacci and his brother Marco are on the cusp of symphonic darkness, this album is an accomplishment as it probes the human psyche by way of five chapters spread across the thirteen album tracks. The first of these chapters involve Greek mythology, religion and of course the myths of god soldiers and Icarus, both tracks “The Wings Of Icaro” which perfectly sets the scene, but it is the title track where the band really switches up a gear, destruction let loose and perfectly executed.

A second chapter hints at the dark side of humanity with the introduction of demons, devils and those who lurk in the shadows, “The Black Sun” will haunt your dreams with its symphonic use of synthesizers against a devilish vocal line, there is a ruination festering clearly in every syllable. All is waging war until a third installment pulls you into the world of nightmares, the unavoidable pain of life itself “The Tormentum Of The Dark Carnival Creation” does claw at your brain until it breaks into an almost uplifting break of beats.

Some welcome respite breaks through the dark clouds as if the sun attempts to shine on this parade of soulless entities through a fourth chapter, though only to be reminded of pain above joy through the “Clock Tower”, one of the more accessible tracks on the album, a stylish melodic track although the vocal line is still drenched in doom. The final and fifth installment is of course dealing with human repentance and the inevitable apocalypse. In the instrumental “The Redemption” with its thunder effects and foreboding piano lines the final scene perfectly.

Launching into the strongest section of the album “Infected World” and finally “Lovers Cursed” are two showcases for the talent within T-Error Machinez, everything is thrown into the mix to bring a fitting climax to extraordinary album. Wether or not a political satire of modern times through mythology or an actual band who loves the idea of folklore and built an album around it is really down to the creators themselves but the listener is capable of whatever interpretation suits them, you may feel however that both theories are correct.

All this talk of concept to one side, the question remains does it work as an album? Simply put yes, the themes of each section do get buried at times under the weight of the industrial onslaught, but it does bubble nicely to the surface again, which is why I went into a bit of detail explaining them as knowing the thread running through the album adds to the pleasure of the listening experience while at first listen it otherwise might be lost.