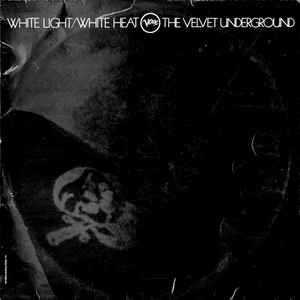 If you believe, and perhaps rightly so that the album ‘The Velvet Underground And Nico’ was an album about drugs, then by comparison the follow up ‘White Light-White Heat’ is an album which is on drugs.

No Andy Warhol this time to rein Reed in, so he could let fly with an eruption of white noise, attacking the listeners every sense. No Nico to shine a sultry light in darkness, this is the abyss, this is where romance comes to die.

The opinion is often that this is the true album and voice of the Velvet Underground, the four members working in unison as one colossal feedback driven war machine. The overstretched sound pulled in on their debut release so as not to hamper any commercial success, but here was let loose to astounding affect all under the guidance once more of Tom Wilson at the desk.

‘White Light-White Heat’ in its black album cover, a reflection of what the package is as a whole, the almost hidden skull tattoo of Joe Spencer blending into the darkness, a print, black on black, the bands name, album name and Verve company insignia all placed on one line, minimal packaging compared to the previous peel-able banana.

But this is voodoo punk before punk had a name, what it should have been, the summoning up of all the aggression in society, focused and executed, the savage feedback dripping as if a disease, ripping at the albums core.

The albums opener, the song itself ‘White Light/White Heat’ is a driving statement in the vain of 'I'm Waiting For The Man', John Cales chugging piano against Reeds vocal, all the while the other Velvets provide the chorus. The intense subject the Underground deals with faithfully is of all things the intravenous injection of drugs and their after affects, mimicked in intensity by Cales fuzzed out, distorted bass outro as if reaching a climax high.

'The Gift', John Cales spoken word story put to the distorted music of The Velvets, an instrumental known simply as 'Booker T.' The deadpan story follows the protagonist 'Waldo' mailing himself to the subject of his stalking, while getting mutilated by accident on delivery. The stereo version separates this tale into two channels, the music and the story, I do highly recommend the Mono version for maximum impact, not just for this recording but most Velvets albums.

‘Lady Godiva's Operation’ in contrast a dark noir romantic story, or as close to romantic as the Velvets get all surrounding a botched operation, humorously sung in the first half by John Cale describing Lady Godiva. The second half sung by Cale alternating with Reed, again full of that deadpan,dark humor which builds in suspense to an eruptive finale.

‘Here She Comes Now’the B side Release to the ‘White Light/White Heat’ single, the most standard song on the album set solely apart from the others by the lack of avant-garde effects. The song itself can be interpreted in either of two ways, one it's song smeared with sexual innuendo, about a girl going to 'come',or secondly an ode to Lou Reeds guitar, his battle cry normally being; ”Here she comes now!” before he takes off into a solo but either way a pleasant break in the madness.

Taking up most of the second side of the album, this heavy-weight result of a seventeen minutes of improvised jam, whereby Cale drives the song with an organ fed into a distorted guitar amplifier. The one take recording, the result of a mutual agreement of; whatever happens-happens ,whatever goes wrong-goes wrong, just keep going.

The resulting effort is monumental in Velvet Undergrounds discography, all the elements that made the band what they were are here for exploration. Never again would they sound so free, the follow-up, the self titled album, similar to that of Led Zeppelins third album, a mellow and more acoustic affair in contrast to the destructive beauty of 'White Light-White Heat’