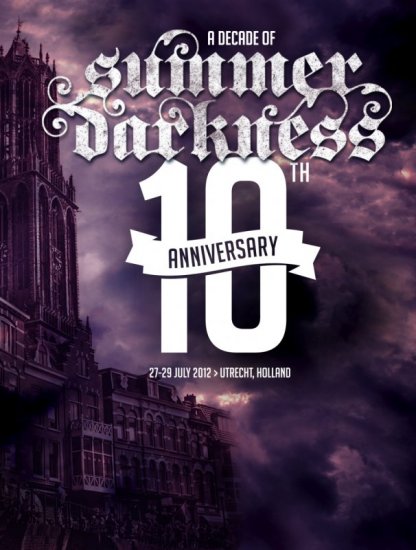 This is the review of Day Two (Saturday) of the "Summer Darkness" festival in Utrecht, The Netherlands.

The first attraction of the second day for us was the project of Nicolas van Meirhaege, our Belgian band Empusae, which were playing in the small club above the main hall of Tivoli-Oudegracht. Accompanied by another keyboard player and by an accordionist, Nicolas created his typical ritualistic and industrial soundscapes with intricate structures. A dark ambient reminiscent of In Slaughter Natives, but less aggressive and more "lounge". Unfortunately, the incredible heat in the club and the lack of excitement in the music prevented us from enjoying this act. Maybe next time?

After their remarkable performances at the Amphi festival one week earlier and at WGT, we were eager to see Aesthetic Perfection again, this time in a club configuration. And we were not disappointed: at 4pm, the band simply stole the show. Their leader, singer and songwriter, Daniel Graves is definitely the upcoming figure in the electro-industrial scene. This American band was created in 2000 and their third album, "All Beauty Destroyed", was released in November 2011. On stage, Daniel is accompanied by Elliot Berlin (live keyboards) and Tim Van Horn (live drums, from Mortiis, who also played with Combichrist).

Precisely, the link with Combichrist is clear in many songs ("Spit It Out", "Spilling Blood") as well as in the very energetic performance. Daniel is running from left to right and Tim Van Horn's live drums are utterly frantic. But the band truly stands out when Daniel alternates easily between distorted vocals (without digital effects) and 'normal' vocals to sing real songs and sing-along melodies. In "All Beauty Destroyed", "Inhuman" or "One and Only", he broadens the scope and we hear references to NIN, Mechanical Cabaret or even Iamx in the burlesque touches. Daniel's contact with the public is exceptional and all along the concert, the complete Tivoli-Helling hall is moving and singing along to the catchy choruses. No doubt: this band is on its way to become a headlining act! Check them performing "Inhuman" below:

Back to the main stage of the "Tivoli-Oudengracht" to watch In The Nursery. Formed by twin brothers Klive and Nigel Humberstone in 1981 in Sheffield, England, In The Nursery are a neo-classical / martial electronic band, known for their cinematic sound. On stage, the twins were accompanied by long-time band member Dolores Marguerite C on vocals (singing in English, German, French,...) and by Q on percussions. The stage presence of the band is impressive, mainly thanks to the drums and percussions but also thanks to the hypnotic and dramatic music. The setlist covered the band's complete career from "Compulsion" and "Bombed" to "Siren" and "Artisans of Civilisation". The band also played the remix of "A Rebours" (see video below). A mesmerizing moment, which seemed a bit underrated as the hall was far from full.

Note that during this act, Monolith, the project of Eric Van Wontergem was playing at the Ekko, but we could not attend. Check the video from numanoid65. Later, we decided to leave the main stage, where the 'classical' acts of Haujobb, Nachtmahr and Combichrist were programmed. We went back to the Tivoli-Helling hall for three interesting (re)discoveries: Mojo Fury, Agent Side Grinder and O. Children. It was a (nice) surprise to see a band like Mojo Fury in the festival's program. After all, these young Irish lads from Belfast are hardly 'dark' at all, rather 'indie', with influences like Nine Inch Nails, QOTSA or Rage Against The Machine. The audience was rather scattered but their show was refreshing, especially thanks to their youth and their hardcore guitars. The screaming vocals tended to be annoying in the long run, though. The setlist consisted mainly of songs from their last album, "Visiting Hours Of A Travelling Circus" (2011) like, eg, "The Mann", "Kill Cock Robin" and their (wanna be)-hit "We Should Just Run Away" but also tracks from their forthcoming album like "Money Body Body Money" (see video below). During the encore, they gratified us with a perfect cover of the (quite challenging) song "Pigs" from their favorite band, NIN, followed by their own song "Lemon Marine". Cool gig!

After this, the hall started to get filled with fans who came to attend another much expected act: Agent Side Grinder. This Swedish band burst onto the scene in 2008 with a never-heard blend of industrial, psyche-post-punk, old school EBM and minimal wave topped with the apocalyptic crooning of singer Kristoffer Grip. The band call this genre: "Industrial Beauty". Some of you might remember their first concerts in Belgium, in 2007 in Brussels at the "Fête de la Musique", on a small podium near the Porte de Namur, as well as their performance at the FantastiqueNight in 2008 in the Magasin 4. Today, they can boast 3 amazing albums and a reputation of killer live act. Their legendary concert at WGT in 2011 made history.

The venue was pretty full when the band took the stage, consisting of Kristoffer Grip on vocals, Peter Fristedt on tape loops, Henric Sunbring on keyboards, Tobias Eidevald on bass and Simon Ekstrand on synths, who was replacing Johan Lange who could not be present. As soon as they started playing "I Look Within" and "Rip Me", from the highly acclaimed last album "Hardware" (see review here), we were all hypnotized by the drilling industrial sounds, hypnotic synth sequences, post-punk bass lines and feverish vocals. The ghost of Ian Curtis was clearly hovering over the music, but references also included Cabaret Voltaire, Klinik, Einstuerzende Neubauten, Front 242, Suicide and Kraftwerk.

Then came "Telefunk", from "Irish Recording Tape", in which it appears clearly that all the music besides the drum machine is performed live on analog synths. Simon Ekstrand concentrates to play the complicated sequence that forms the basis of the track, while Grip is getting more and more frenetic in his vocals and movements. The comparison with Nick Cave, and even Jim Morrison becomes even more obvious as he gets into a complete trance during "Sleeping Fury", screaming the lyrics like incantations.

Later, the band plays "Wolf Hour", the single, in which Tobias takes over the vocals created on the album by guest singer Henric de la Cour. Finally, the set draws to a close with the masterpiece "Die To Live", a drilling song that evokes "Isolation' from Joy Division. The ending is hypnotic with swirls of vintage synth sounds.

During the concert, the audience was gradually mesmerized by the performance and at the end, the whole venue was screaming for an encore. The encore came with the song "Me, Me & Me", followed by the much expected "The Voice Of Your Noise", the 5 minutes long 'tour de force' from the band's first album, a song which clearly reminds us of The Doors, but with a destructive industrial rendering. In a nutshell: a truly awesome concert, full of raw violence and mastered tension. This band is a must for all lovers of minimal, trance-oriented EBM with a 80ies touch! After the concert, we had the opportunity to interview the band: stay tuned for the upcoming separate article! And if you want to see them live, don't miss them at the Fantastique.Night in Brussels on 8 December 2012.

Because of the interview, we could only watch the last part of the O. Children show. This UK-based band stands out by the figure of its black singer, Tobi O’Kandi, who is very tall and impressive on stage and has a very deep, deep baritone voice. The other band members are Andi Sleath (drums), Gauthier Ajarrista (guitarist) and Harry James (bass). O. Children take their name from a ballad by Nick Cave on the album "Abattoir Blues/The Lyre of Orpheus". The band's music is reminiscent of Nick Cave, but also of Jesus and Mary Chain, Joy Division and The Smiths. The best moment of their show was undoubtedly their song "Ruins", the masterpiece taken from the first album. This magnificent song has clear accents of gothic rock à la Sisters of Mercy and Fields of The Nephilim. A great moment, that you can watch in the video below. As a whole, the band seems still a bit young and immature; they need to gain more assurance to become a first-tier act. Up to now, they at least managed to draw a bridge in London between the 'indie' scene and the 'goth' scene, which in itself is already quite an achievement! A band full of promise!

Read the reviews of Day One and Day Three.

A big 'Thanks' to Summer Darkness, Marc X-Pulsiv, Peter Fristedt and Kristoffer Grip

Next reviews
• Review of the Summer Darkness festival (DAY ONE) with Diary of Dreams, Suicide Commando,.. (Utrecht, 27 July 2012)
CATHERINE GRAINDORGE • The Secret of US All
EMILIE AUTUMN • Fight Like A Girl
LUST FOR YOUTH • Growing Seeds
PARADE GROUND • A Room With a View
THE SILICON ARTIST • Windows On The World
TOBIAS BERNSTRUP • Sing My Body Electric
INDIANS IN MOSCOW • Indians in Moscow
ELEVEN POND • Bas Relief
SPEAR OF DESTINY • The Singles Collection