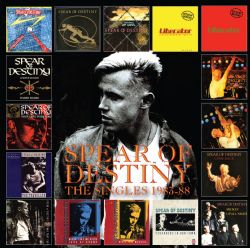 How does a band feel if you say they’re the most underrated band in the world? Right, you can say they’re kind of flattered but at the same time you have to add the magic (or do I have to say tragic?) word “if”. Cos if they were not underrated, they would not only have made a fortune, but they could have been proud that a whole nation is singing their hymns while having a shower, not? A crazy remark I know, but listen twice (or even once) to “So in love with you” and I bet you’ll sing it the next time you’re entering the bathroom.

So yes, Spear Of Destiny, the band fronted by Kirk Brandon, is oh so underrated, even if they have a huge loyal following in the UK but outside they mean nothing, at least not to the big masses who keep on claiming that Theatre Of Hate (Kirks previous band) were so much better as they’re not, they were simply two different (genius) bands with the same singer. When choosing the genre for their music, I thought the best thing to do is call ‘em dark pop as they’re a band that knows what a timeless refrain means, but at the same there’s a morbid twist in their music.

As a dedicated fan I should say this album has no sense as you simply have to own all the albums they released but of course this is a Cherry Red-release and they always offer a bit extra, not? This time, you get (apart from the singles) an extra disc containing all those rare 12” versions. For the youngsters among you: a 12” was a black vinyl record that has to be played at 45 rpm and contained an extended version that meant more than the 10 extended remixes you get on CD-singles these days.

For one minute I was planning to end my review with the words that I’m so in love with them (hence their hit) but for the most underrated band in the world that’s far too simple to say, not? Genius stuff that you have to embrace and no, dad, they don’t make ‘em like this anymore these days. Shame.