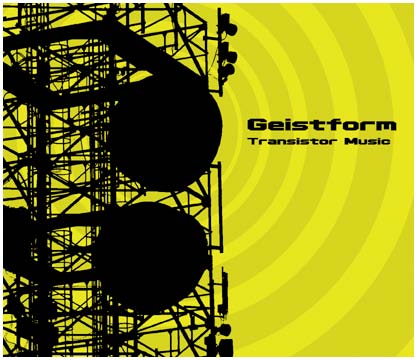 Rafael Martinez Espinosa (Spain) working under the moniker Geistform is another industrial act on Hands Productions. His first exploits were Uno and Sequentia 2.0 on Dirk Ivens’ label Daft Records and this (released November 2010) is his second album on Hands, following on from Pro Analogic. Finding the balance between rhythmic industrial and ambient techno, it's again amazing how diverse electronic music can be.

Most songs are rhythmic industrial tracks with thick production (Source Sensor, Radiacion, Alta Energia, Tesla) while some have a background filled with trippy sounds and bleeps (First Product, 2osc, Solid State). There's even some This Morn Omina-style tribal percussion in some songs (Cms Detector, General Electric). It's about 70 minutes of bliss and some songs should have been even longer. I really liked Bad Particle, very repetitive bassy rhythms over a harsh noisy background that works well with the spacial bendy sinewaves. One of those songs that you don't want to stop listening to...

The perfect album if you're into harsh electronic stuff like Sonar, Greyhound, Winterkälte and more recently Syntech. Gothrockers or other wavers beware; it all might sound the same to you. But still worth checking out!

Next reviews
MATTHEW CHOJNACKI • Put The Needle On The Record: The 1980s At 45 R.P.M.
THE HIRAM KEY • Amerikafka
DER BLUTHARSCH • The story about the digging of the hole and the hearing of the sounds from hell
KITTY IN A CASKET • Back To Thrill
NORTHERN SADNESS • Riddles Of Lunacy
SYNTECH • P'som-Sett
ADOLF FILTER/KORD/MONSTER APPARAT • Svensk Bonnasynth
THE CURE • Bestival Live 2011
DR.KRANCK • Haus 13
MADAME B • Psalm 37.29