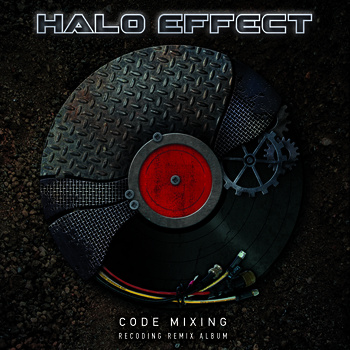 Halo Effect is an Italian electro band formed 10 years ago. They have some EBM and industrial influences, but finally I would classify them as electro pop. They already toured in the electro dance scene, with bands like De-vision and Covenant.

Two years ago they made the album 'Recoding', and now they release the remix album 'code mixing - recoding remix album'. This album includes all tracs from 'Recoding', remixed by several international bands like Dupont, Foretaste,Chainreactor, Lights of Euphoria....

This album really variates in styles depending of the band who remixes the track. Sometimes a more industrial style ( mixes by Hypnoskull or Synapsyche), and sometimes a more pop style. Most tracks even sound stronger than the original, and I really like the mixes from Massiv in Mensch with 'Pulsar', and 'Spaceman' by Future Trail.

But I save the best for last, this album also comes as a free download, as a gift from the band, just to all the fans who supported their music. So if you're an electro pop and dance lover, or like a nice pounding beat from time to time, don't hesitate and download this record. You won't not regret it. So a big thank you to Halo Effect for this late new year's gift