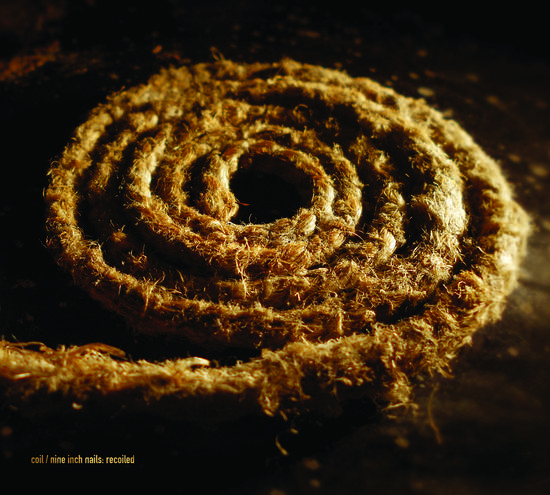 Coil was an English experimental music group formed in 1982 by John Balance and Peter Christopherson (Throbbing Gristle), later joined by Danny Hyde (Black Light District). Although John (2004) and Peter (2010) already died, Coil remains one of the most influential and best known industrial music groups ever. Coil's distribution and marketing techniques somtimes included releasing a limited number of albums for collections among devotees, like this one.

This album 'Recoiled', is the result from the special mixing techniques Coil had in the 90's. Lots of special effects and percussions are used, even the use of baby alarms and other strange objects.

Trent Reznor, who was a big admirer, asked Coil te remix some of his tracks, with as a result these 5 lenght compositions. These legendary tracks were always rumoured to exist, and thanks to a dedicated NIN forum, they were found and released.

'Recoiled' also includes a fuller, more opulent version of the famous track 'Closer', wich even made it at that time onto the opening credits of the brillant movie 'SE7EN'.

In 2010 Trent Reznor started a sideproject with a band called How To Destroy Angels, this was the same title as Coil's first single, and so an ultimate tribute to this band.

This album is a must have for the real Coil and NIN fans, but for most people it might all sound a little to experimental.

3. The Downward Spiral (A Gilded Sickness)

Other reviews from COIL
COIL • Backwards