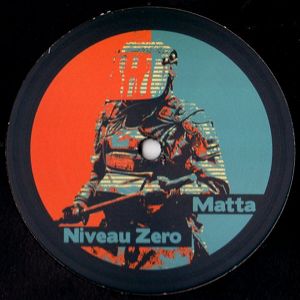 More dubstep?? Is this still a new wave/gothic magazine? Well if it sounds good and has a dark atmosphere, why the hell not?? Matta and Niveau Zero are both on Ad Noiseam and Niveau Zero will soon come up with a new album, "Jasmine". But let's talk about this 12".

"Riot" sounds fat and heavy, I love the bleepy breaks, the wicked touch of humour. Good rhythms - excellent stuff to mix around and drive the crowd insane. "Be Real" has a gangsta hiphop theme that works well, starting with some newsflash and lead wobble basses. I would've made the vocals even deeper, it would make it even more impressive. But impressive is not really the word for this song - for the last minute it just fades out into nowhere, a real downfall that makes me scratch my head.

The first song is good, but the second one is good for two minutes, mix another one in too avoid the drop... Law Enforcement by "Underhill" does a better job at mixing dub with hip hop...