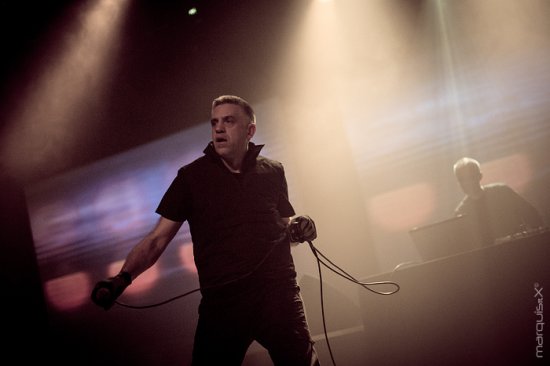 Portion Control is a regular guest in Antwerp: in 2010, they played at the Pre-BIM Fest and this time, they are headlining the first day of the BIM Fest together with Test Dept. Founded in London in 1980, Portion Control is probably one of the most underrated acts of the electronic scene. Their pioneering works in EBM and industrial music have influenced masters from NIN, Skinny Puppy, etc. but didn't bring them the fame that other fellow bands like Front 242 or Nitzer Ebb received. After an absence of almost 18 years, Portion Control resurrected in 2004 as a duo with Dean Piavani and John Whybrew and released an impressive series of CD's: "Well come", "Filthy White Guy", "Slug", "Crop" and recently "Pure Form".

At the BIM Fest, Portion Control presented a set consisting of their classics and more recent songs, a real treat with stomping beats and excellent video footage. They got the audience moving straight away with their raw punky danceable EBM. Songs like "Waste", "Icon", "Deadstar", "Katsu" or "Sickman" banged through the speakers and gave the audience no time to rest. The songs were long and hypnotic, usually with a very simple, but efficient rhythmic and harmonic structure. Dean Piavani was moving around stage, singing with impressive power and stamina. The band had the best sound on that festival day. Wide, clear and strong.

They ended their set with the fantastic "Amnesia", the perfect icing on the cake. In the public, everybody was dancing and you could see an enthusiastic Dirk Ivens (Dive, Absolute Body Control, The Klinik) having the time of his life... Too bad he wasn't invited to join Paviani on stage for "Brain Scraper Death Dive", it would have been a special moment! It was by far the killer concert on that first festival day!

Watch the band performing "Amnesia" below: