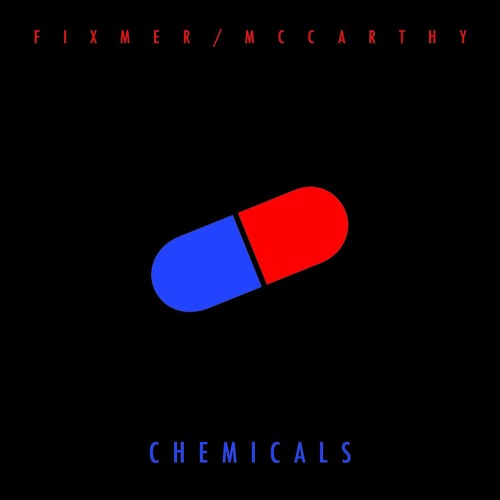 The electro duo FIXMER / McCARTHY is back. And how! Titelsong Chemicals (check the video!) clarifies again that the chemistry between these two gentlemen is more than okay! Terence Fixmer has released more technoid music under his own name before and in his solo compositions already showed a heavy influence of the dark electronic wave music from his adolescence.Thus it is no surprise that, if you put him in a studio with Nitzer Ebb - frontman and - voice Douglas McCarthy, sparks fly. The duo has already released strong work before but this Chemicals is a proper MOAB (Mother Of All Bombs) dropped in the EBM / electro world!.

This maxi-single (nice to be able to use that word again since a long time) has been released by Sonic Groove Records. This label was founded by the New York based electro & techno DJ/producer Adam X who has released more dark songs on vinyl before, of Monolith, Pankow and Click Click a.o. It's a pity there are only 3 songs on this 12" but hey, that was what maxi-singles were all about in their time. Besides Chemicals this maxi-single holds an instrumental version of the title song and the never before released new song 'Wrong Planet'. The instrumental version of Chemicals is probabely ment to not overload the electro, techno-heads and beat-mixers with scarce brain capacity by not to confusing them too much with lyrics and words. 'Wrong Planet', over six minutes long, sees Douglas McCarthy getting so angry about our planet that you would almost impulsively go out and buy the release before it is too late!