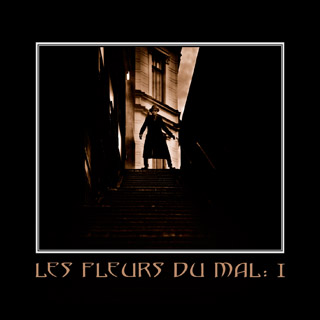 While my collegue Bernadette decided to review the chef d'oeuvre from Charles Baudelairewith the same title, I keep it to music. Perhaps up there in heaven I might be punished for my cultural sins but at least I will be honoured (at least that's what I think) for selling my soul to the mighty sound of gothic rock.

A dying breed it is, for sure and normally a genre in which we watch our old heroes reform till they turn out to be some skeletons but luckily enough there are new bands around the corner as well.

We have respect for you and we won't say that this Swedish project named Les Fleurs Du Mal are as good as The Mission or The March Violets , but they're good that's for sure!

Having a look at Axel Grim makes you think of Eldritch during his Floodland-days and it seems that it's more than just a love for the same type of sunglasses that they share.

On this EP we are offered five songs, where they have no fear of some healthy bombast. "A long day's journey" is a classic gothrock song with some real choirs while "My funeral" (those lyrics alone) is the best song that never made "Disintegration" from The Cure.

A triumph? Not quite yet, but with this EP it looks like we have another rising gothstar among us.