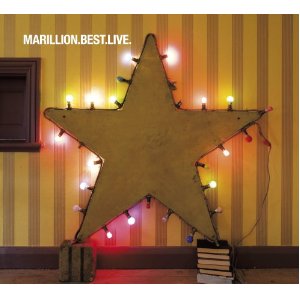 Marillion are a British rock band, formed in Aylesbury, Buckinghamshire, England, in 1979. The name "Marillion" is inspired by the "Silmarillion collection" from J. R. R. Tolkien. The band's recorded studio output since 1982 is composed of sixteen albums generally regarded in two distinct eras, delineated by the departure of original frontman Fish in late 1988, and the subsequent arrival of Steve Hogarth in early 1989. All four albums released with Fish were commercial successes, and the band released eleven Top 40 hits on the UK Singles Chart, including 1985's "Kayleigh", which reached No. 2 and became their biggest hit single. The "Hogarth avatar" did not collect the same success but managed to maintain and develop a strong and loyal following, especially via Internet and social networks. In total, Marillion have sold more than 14 million records!

This new double CD "Best.Live" is a collection of 20 songs recorded live between 2003 and 2011. Only three songs are taken from the "Fish avatar", from the album "Clutching At Straws" (1987), and you can hear from the audience's reaction that this period is still dear to the fans' hearts. Apart from this, most of the songs are taken from "Afraid Of Sunlight" (1995) and "Marbles" (2004). In comparison with Fish, Steve Hogarth has brought more emotion, more sensitivity and a more intimist, even pop-oriented music. The songs are less bombastic, less extravagant than with Fish and are much more reminiscent of Radiohead, Razorlight or Waterboys than of Genesis, Porcupine Tree and the other "prog" bands. Some songs, like "Neverland" or "The Invisible Man" develop into true masterpieces of 15 minutes, exploding in Steve's screams and in brilliant guitar solo's (much in David Gilmour's style). It's mainly on stage that this band gets its full dimension, creating a real communion with its fans. In a nutshell, this double CD is a nice introduction to the second part of the band's career and icing on the cake, it comes with a very nice booklet!

If you want to see the band on stage, they will play at the Splendid in Lille in on Thursday 15 November.