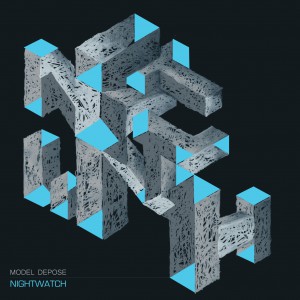 Model Depose is a Dutch band from Groningen, Holland. They make a kind of 80's pop with spacy syths and rocking guitars

Nightwatch is there second E.P. with four new songs, and a remix

I saw this band a couple of months ago, during the Dutch an dark tour with Angels and Agony, Schwartzblut and Sophya. And for me this was the surprise of the evening. Especially the lead singer impressed me. Long time ago i heared a new band with such nice vocals. His singing was for me a mix between Brian Molko and Simon LeBon.

With this album 'Nightwatch' hopefully they get some recognition outside their home country, Holland.

Opening track 'Mayday' is a nice pop song with some catchy synth loops, but my favorite is the title track, a bit darker, but yet again with brilliant vocal work by Roeland van der Velde.

This album was produced by the German Malte Lahrnmann, and he made this poppy album really catchy. Maybe we see these 'New romantics' back at some nice festivals soon