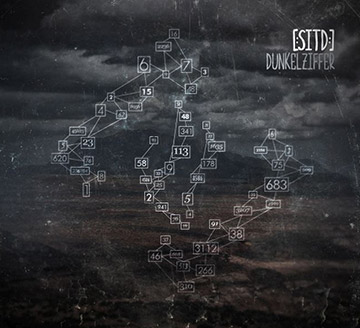 The album starts with a nice intro. Dark synths topped with a sample of Gregorian singing are building up the atmosphere. Then you hear Samuel L. Jackson screaming: “And you will know my name is the lord”, seamlessly followed by the wicked opening sequence of Dunkelziffer, which is truly an uplifting dark electro hymn, while the Gregorian voices of the intro return. It’s an impressive track about child abuse in the church that combines aggression with atmosphere. One of the best tracks I heard this year in this genre or maybe even in general. There is an extended version included on this album.

Purgatory is another hammer with some hard hitting percussion. Auto-aggression is made of the same typical [:SITD:]-elements,while the piano brings a melodic touch. Everlasting is a slow song with floating synths. In this one you don’t hear Carsten Jacek’s distorted vocals, instead you hear Tom Lesczenski who makes this track really melancholic with his clean vocals.

Revolution is crafted with heavy rhythms and is criticizing the trade in German weapons. The next track is called Santa Muerte. A minus point is the use of robotic voices in some verses. I can’t see the added value. But apart from that, the song has everything to tempt me: dark atmospheric keys, fantastic percussion and a catchy melody. Journey’s end is an instrumental with an important part for the piano.

Memorandum is more upbeat and more future pop orientated. The song is reminiscent of their Stronghold debut album. After the slow and harsh Vendetta, a mysterious outro ends the album. An album that sounds familiarly [:SITD:].