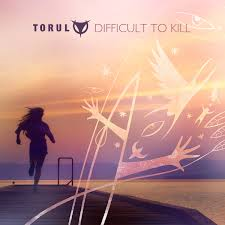 Torul is an electro pop band from Slovenia, headed by Torul Torulson, brainchild and songwriter. He is accompanied by synth player Borut and singer Jan. Difficult to kill is the second single from their album The Measure. Torul's music can be described as dreamy synth pop with some nostalgic wave from the 80s, but this band has a kind of happiness and pleasure about itself that is hard to find. I already saw this band live and it surprised me a lot, it might even become big in the electro pop scene in the future. Especially the vocal qualities of Jan Jenko were the best I heard in a very long time.

This Difficult To Kill track can be described as a relaxing, but also intensive electro pop song. The dreamy lyrics, but especially the impressive powerfull vocal parts, for which I really like this band, lift this track up to a very high synth pop level. The melancholic anthems of these three Slovenian guys prove that this is a great musical combination. Aside the original mix, there are two remixes on this EP. All the artists add some accents to the song, to the more dancable version of Torulsson, and to the more aggressive version by Kobayashii.

The Lonely Night track is at the same high level, some more tempo, great piano riff, even danceable, and again the mystical and beautiful voice of Jan. A brilliant pop song by a band of the new musical generation.

Some mixes from their fantastic track The Balance are also included. Sometimes a pop track can be that brilliant that any remix is a waste of time, but these guys gave me electro pop goose bumps. The clubby electronics together with some charismatic vocals, carry you away into their dark dreamy world.