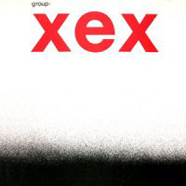 It's actually pretty funny to see how groups from days gone were totally ignored back then and decades later, mostly because of their authentic sound, suddenly became known as cult heroes..

Of course these records are impossible to find as all those lovely recordcollectors already have them in their collection, and if you find them by luck we don’t even want to mention the price. One of the labels who are specializing themselves in re-releasing those gems from the past is Dark Entries Records from The States. So far this label has some wonderful stuff in their backcatalogue, Borghesia or The Neon Judgement to name a few

Their latest rediscovery comes from New Jersey and they’re named xex.
xex released “group:xex” in 1980 and nobody couldn’t care less about the band which got founded by Alex Zander who passed away in 2003.
But today analogue sounds are hip again and so it happens that xex are these days are seen like some hot item.

You definitely hear that xex is the kind of band that doesn’t want to sound too serious. Every track seems like some joke but still there is some genius idea behind it. Also the female vocals will remind you of the early sounds of The B52’s.

Irresistible synthmelodies, a childlike innocene and not being afraid to go flat on the face makes this the kind of 80’s record which you love to have in your collection.