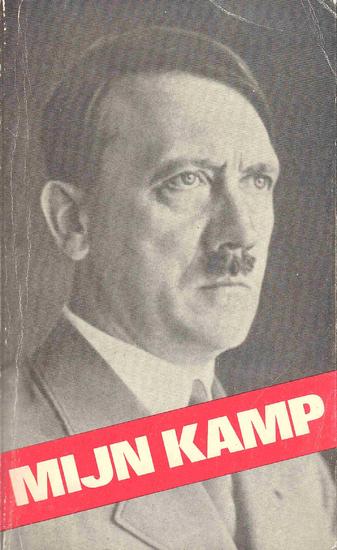 Mein Kampf by Adolf Hitler is not only a highly controversial book, even now it still arouses in many people a sense of disgust because of the racist ideas that are expressed in it. The editors of Peek-A-Boo are well aware of this sensibility and thus the sole purpose of this review is to put the book in its historical context. For the rest, it should be clear to everyone that PAB explicitly dissociates from the deeds and words of Adolf Hitler.

Review:
How would Europe be like if Adolf Hitler in 1907 - he was 20 years old – had succeeded the entrance examination to the Vienna Art Academy? We will never know, just as we do not know how Europe would look like if he had won the Second World War for Germany in 1945. What we do know is that it was his ambition to become a painter and that the suggestion to do something with architecture was senseless because he left school at the age of sixteen without a diploma, the basic requirement for studying engineering. He found a job as a day labourer in construction, but because of his controversial political views he was dismissed quite often and his five year stay in Vienna was therefore mainly marked by hardship, hunger and the prolonged stay in a hospice. A lost life, it seems, and surely not the best starting position for a career as party leader and dictator of one of Europe's most powerful states. But that position Adolf Hitler surprisingly reached on his 44th birthday when the German President, Paul von Hindenburg, reluctantly offered him the post of chancellor (prime minister) in January 1933. The conservative politician Franz von Papen was responsible for that choice, because he thought that the very popular Adolf Hitler could be kept short by a majority of conservatives and Catholics in the new cabinet. His presumption was wrong, because Papen did not take into account that Adolf Hitler detested parliamentary democracy and that he would do everything in his power to destroy it if he got the chance. The burning of the Reichstag (end of February 1933) gave him the excuse he needed.

But it did not occur to Franz von Papen to inform on the ideas of Adolf Hitler and that's a shame because Hitler's thoughts on parliament and democracy, Marxism and socialism, Jews and non-Germans in general, were gathered in Die Abrechnung (The Reckoning), written during his stay in the prison of Landsberg a/d Lech in 1924, after a failed coup in Munich. After his release (he was sentenced to 5 years but was only imprisoned for 10 months) he added Die National-Sozialistische Bewegung (The National Socialist Movement), issued in 1926. The first part was a bestseller during the Weimar Republic (1918-1933). In 1932, both parts were issued as Mein Kampf of which until 1945 around 11 million copies were sold in Germany, making Adolf Hitler a pre-war Deutsch Mark millionaire. In Germany the book is banned since World War II, as well as in the Netherlands. In Britain and the US it is freely available.

For today's readers Mein Kampf is a difficult book and certainly not a book that one reads to relax. And he who believes to become a full-fledged Nazi in a couple of hours, will be disappointed, because Hitler's writing style is baroque and cumbersome with long sentences, endless repetitions and little logic in the sequence of ideas. Most chapters are boring and as pedantic as his later speeches, because Hitler needed a few hours for what an animated speaker could tell in a fraction of the time. His exposition of the political system in the Austria-Hungary is largely true, but his conclusions are the logical consequence of his highly subjective interpretation of the state of affairs. His reasoning is hard to follow and given the distance in time, extremely dated. The best section in part 1 is the biographical portrait of his youth and his difficult years in Vienna, because that part is spared the preachy and pushy tone of the rest of the book. After an overview of developments in Austria-Hungary in the following chapters, Hitler gives a political, socio-economic, social and cultural analysis of the situation in Germany, and it is remarkable that he has nothing good to say about German society, where syphilis is rampant, the arts are dominated by Cubism and Dadaism, humanism is glorified, nothing is done to stop the declining church attendances, education is inferior, politicians are corrupt and the army is too small to protect the territory and the German people against its European enemies. Xenophobia in all directions, but luckily, Adolf Hitler has a solution for all the problems of modern society.

The most essential part of Die Abrechnung is the chapter on People & Race, for in it he stresses that the white race, the Aryans of Europe and America, is elevated above all other races as a result of its unique creativity and resourcefulness. The survival of the human species lies in its hands - what else would you expect? – but it is on all fronts opposed by the Jewish race as the vanguard of international capitalism. To prove that the Jewish race is bad and inferior, Adolf Hitler uses all popular clichés and even The Protocols of the Elders of Zion are referred to to sustain his argument. The American edition of The Protocols was sponsored by car manufacturer Henry Ford in 1920, who publicly apologized in 1927 because it was a proven forgery. But still in the early thirties Ford expressed his appreciation for Nazi Germany on different occasions.

In the last chapter of Part 1 Adolf Hitler discusses the expansion of the NSDAP (Nazi Party) until his arrest in 1924 and in Part 2, he describes the conditions for a good functioning national socialist party (14 points), the role of propaganda for influencing the people, whereby he points out, among other things, that social progress is very importance to get a mass movement off the ground. Of course, the bad position of Germany since the peace treaty of Versailles is discussed (1918), the reasons why Germany lost the war, and Adolf Hitler looks at the future: what alliances are possible and useful, in what direction can the German territory be expanded and why has Germany the right to self-defense.

Hitler's worldview was shaped by the unstable political situation in Austria-Hungary in the second half of the 19th century, where the working class was plagued by severe poverty and appalling living conditions, according to the author due to greedy rulers (Habsburgers) and a political clique, barely interested in social issues. In a very early stage Hitler was in favour of a reunification of the German-speaking Austrians with the so-called German motherland, because since the introduction of parliamentary democracy 10 million German speaking Austrians were dominated by 40 million Slavs from the east of the empire and he feared for an irreversible process of assimilation. At the same time he noted that there were some 200,000 Jews living in Vienna, who - he believed - were over-represented in the cultural sector and in the press and were able to introduce their Marxist ideas easily into society. Capitalism, Marxism and Zionism were clearly difficult concepts for the little man of Linz, because his assertion that Marxist Jews were the lubricant for foreign capitalism in Austria-Hungary and later in Germany, it is a crooked thought, unless you are a gullible and uncritical reader, unaware of the political and socio-cultural evolution in Europe since WWI.

Is Mein Kampf an exciting and highly readable book? No. Is Mein Kampf an interesting book? No. Mein Kampf is primarily a book for historians, because the relevance of the material for the average reader is almost zero after 90 years. Politically and socio-economically Europe has become a completely different continent since then (capitalism is the base of the economic system; the Jews have lost their important place in social life due to the murderous policy of the Nazis, or they left for America when they still could), and most Western Europeans are much less anti-Semitic than their ancestors before World War II. We do not like to hear it, but our ancestors were much more anti-Semitic then, or were Martians responsible for pogroms against Jews in Europe since the Midde Ages?

In November 2014 an Amsterdam bookseller was acquitted by the court following a complaint about the sale of a copy of Mein Kampf. The judge ruled that a penalty is no longer relevant because everyone can now easily purchase the book over the internet or even download it without getting problems. Mein Kampf remains banned in the Netherlands because of the insulting tone to Jewish fellow citizens. The latter is obviously a valid argument, although banning a book can never be the perfect solution, or as the Dutch publisher in the introduction to this edition (1982) writes: all the historic greats who at some time presented their views in writing, are represented in the bookstore: Lenin, Stalin, Trotsky, Marx - and their books are sold every day, not because one agrees with their doctrine - Stalin made millions of victims - but to know. ‘The Anarchist Cookbook’ explains in detail how to manufacture Molotov cocktails and bombs, and how to unleash riots and chaos. It probably makes more claim to the qualification 'dangerous'. But it's freely available on the internet.

The fear that people would make the ideas of Hitler their own, remains high, but there are certainly more concise and better written books on the subject than this Mein Kampf, in which the author needs 850 pages to explain what others – after some redaction – can tell on half the space used (and a fourth if you would delete all the repetitions and nonsense).