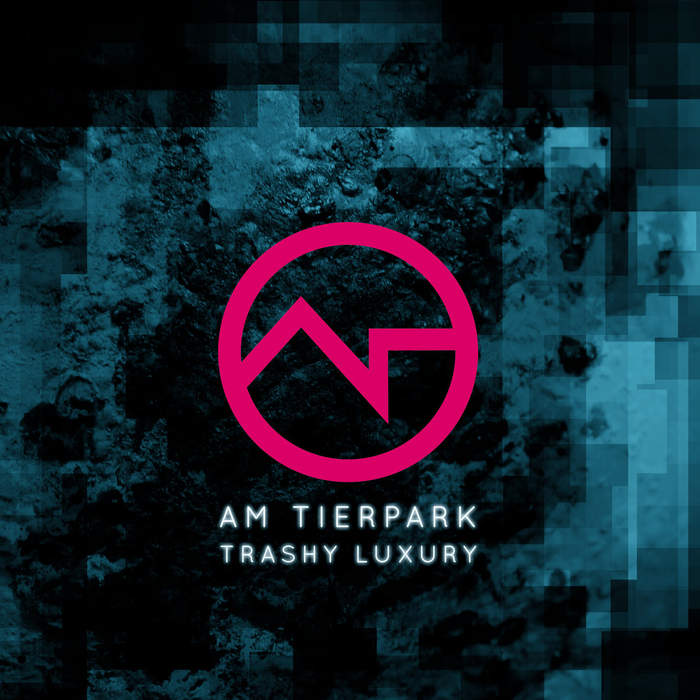 Like many other synth pop fans, I have been waiting for the second Am Tierpark studio album with great anticipation. I have been following the project since Uncaged and I am proud to consider myself an Am Tierpark fan. Over the last couple of years, the collaboration between John R. Mirland (music and production) and Claus Larsen (lyrics and vocals) was indeed fruitful. They merge the 80s influences with the modern approach and create a distinguishable synth pop expression which can sound nostalgic or futuristic at moments. Their sound varies from almost minimalistic to rich atmospheric soundscapes.

They open Trashy Luxury with “Song For Us”, built on the good old 80s foundations. The song is dancy, rhythmic, with recognisable 80s bass line and wonderful floaty synths in chorus. However, if you are used to hearing Claus as Leaether Strip or Klutae, be prepared; his vocal interpretation is rather emotional. Although “Life On The Run” plays with a bit harsher expression, it still remains inside synh pop boundaries. However, the song relies more on the beat than the melody, which invites you to the dance floor. The third track, “I Cannot Breathe In Here”, takes us on another voyage. This time I can clearly hear the futuristic soundscapes and the overall sound is rather melancholic, which gives Claus more manoeuvring space for the emotive interpretation. The pace slows down with “Heal My Pain”. They create the atmospheric minimalistic synth sound combined with narrative story-telling vocals, which transform into the seductive chorus. “How Do I Love You” is another melancholic moment on the album. “We're All The Same”, from the same title EP, found its place on the second half of the release. Poppy and catchy melody is combined with danceable beat and Larsen's softer vocal expression. “Blue Beret” offers unusual melodic twists which make this piece the most intriguing track. However, one of the brightest moments is “Nightpeople”. Wonderful catchy refrain and the dance inviting vibe make you want to listen to the track on repeat. I can't escape the retro feeling listening to it; maybe I just found myself a favourite! “The Branch It Broke” retreats to the more melancholic and darker corners of our hearts. They saved the most emotional and touching moment for the very end, with “I Think We Made It”. After 9 “synth pop parade” songs, the tenth place was reserved for a soothing, melancholic and utterly emotional piece. However, the whole album sets you on your own emotional voyage, and they proved once more that synth pop can be a moving and heart-warming music genre.

“Trashy Luxury” is released through LÆBEL - the band’s own music label. It is offered both digitally and as a signed and numbered limited edition double CD that includes the “Cherry Blossom” EP and the debut album “Uncaged” for those who missed it the first time around.

Trashy Luxury is available directly from Læbel through Bandcamp: https://amtierpark.bandcamp.com/album/trashy-luxury and through major shops and distributors worldwide.

Other reviews from AM TIERPARK
AM TIERPARK • Uncaged