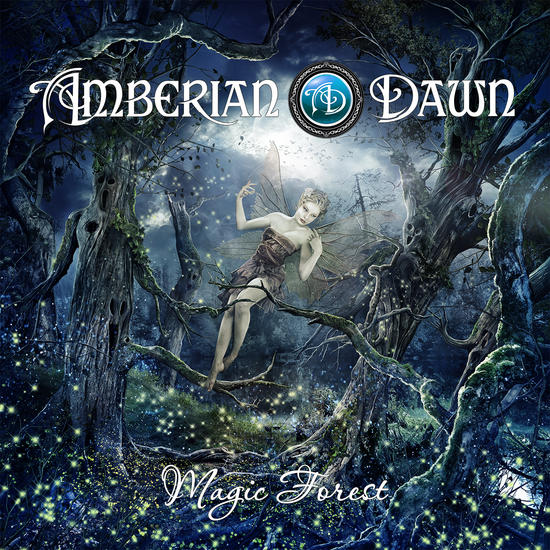 Amberian Dawn brings nice symphonic metal, with a great female fronted sound and lots of faeric influences. I must admit that the first track - 'Cherish Me' - reminds me very strongly of ABBA, but then in a symphonic metal version.

'Dance of Life' has a high tempo and is clearly symphonic metal minded. I caught a nice guitar solo too! 'Magic Forest' starts as if it was part of an impressive musical (could be a Disney musical). The voice is very close to Celine Dion in this one.

The symphonic orchestra plays an important role in this one. The production sound is really a pearl! 'Agonizing Night' takes us deeper into the symphonic sound with lots of classic instruments and great backings! It has a very impressive sound!

'Warning' goes back to the Disney musical, is a bit bombastic and sounds as if the faery people are having a party to scare the darkness away! It has also a big Eurosong festival vibe! 'Son of Rainbow' is sweet and enchanting you with their faery touch. The chorus is very catchy! 'I'm Still here' is going back to the main symphonic metal sound with a great solo in it. The voice sounds very powerful and touches one soul at another moment. 'Memorial' gets into an opera or at least a very classical sound with the male tenor voice as an extra add! More and more I feel like being part of a very expensive musical. 'Endless silence' gets great and powerful vocals, a magical guitar solo and a more hard rock directed sound. All metal registers are opened after a while and the bomb explodes. 'Green-Eyed' is the last track and is a real ballad, driven by strings, a harp and a classical bombastic sound. The musical almost gets a happy end. A lot of lighters will be lifted during the next gig! A great emotional and bombastic end!

At first it was a bit strange to run into some kind of musical orientated symphonic metal story, but the result is a happy end and a good feeling. I'm glad I got dragged into this new world and discovered another new sound and yet another great band. Aïte!