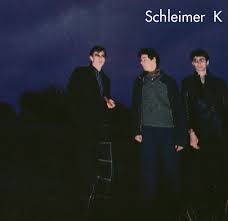 Of course Schleimer K. meant nothing in the 80’s. They only made music for themselves, their uncle and who knows for a girl who lives next door…but what a sound it was. Back in 1981 this UK trio released their debut on Omega Records and now three decades later it is presented by the French Infrastition label. Not that it’s a surprise, as not only the label is specialized in such obscure sounds, but they already have released an album by them (Wounded Wood, one of the first releases that was reviewed on Peek-A-Boo).

Apart from the eleven tracks that were on the album, there’s the obscure single She’s Gone as a bonus. It is quite hard to pin down the music that’s been created by Dominique Brethes, Mark Benjamin and Michael Wolfen. There’s surely a minimal sound in there but it is also kind of dark and arty. The first thing that spring to my mind was Virgin Prunes and I was kind of glad that reviewer Kurt Ingels from our Flemish sistermag Dark Entries thought this as well. Sometimes it’s funny like the cover from the countryclassic On the road again, and sometimes it’s quite experimental as Come To Me has a bit of a Pseudocode-touch.

A fine release for people who are hooked to 80’s sounds. Just don’t expect to hear some easy listening dancefloorkillers on here as it’s not. Imagine Peter Murphy recording a Tuxedomoon-record and I guess Schleimer K is the result