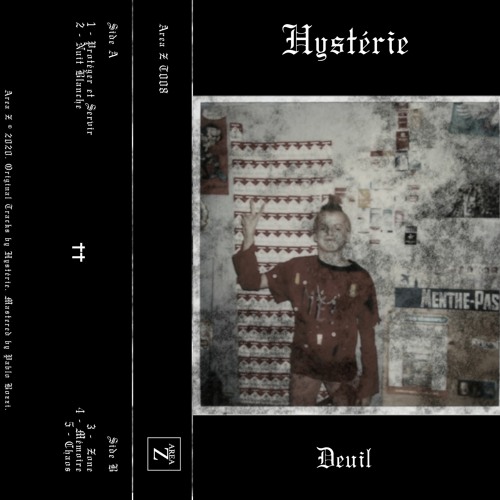 With this new EP French Synth-punk band Hystérie present their first EP called Deuil (which is French for mourning) on Area Z after two releases on Parisian label 'Le Turc Mécanique'. This EP contains five powerful tracks with dark melachonic synth lines, heavy guitars and punky angry vocals, completed with samples and nostalgic guitar melodies. The reason I chose this release out of hundred others is their unique sound, although I have to amid I’m usually not attracted to French sung songs, except maybe ’Je t’aime’ or ‘Joe Le taxi maybe’ … Anyway, before I wonder off too far … I would describe their style thus as Cold-wave-Industrial, reminiscent to the sound of Belgian bands like Red Zebra, The Neon Judgement and maybe even the more industrial Stin Scatzor. One can clearly feel the anger, dispair and dissatisfaction when listening to the songs. Not only the punky style vocals but also the global atmosphere that the songs, one by one, tend to breath. This release will be available both on the nostalgic media, cassettes and as cold modern digital tracks. I never heard of this band before, still I was immediately sold after hearing just one track! So I say, dare to explore! Give this a listen and you might want to order this tape before it sells out!