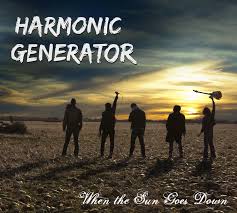 When the sun goes down

I know nothing about Harmonic Generator. Are they big or is their fame just limited to the local pub? Everything’s a bit of a mystery, but that happens most of the times whith unrequested material that’s been dropped in my mailbox.

All I know is that Harmonic Generator are heading from Marseille. It’s not the kind of music I usually relate with France but then again those rockers neither don’t, as they went to Australia. They toured and recorded their debut When The Sun Goes Down there which is now in my hands. It’s clear that singer Quentin Barthes-Villegas believes in the power of rock. The kind of guy who sold his soul to rock and probably daydreams of playing in a band like Aerosmith or even early Van Halen. Because yes, this old traditional hard rock drenched with melodies and a dirty sound that I kind of relate with say New York Dolls. The nine songs on here are not exactly what you’d call original, but they work.