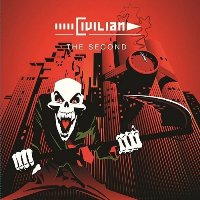 Civilian is a hard rock/heavy metal band from Limburg, Belgium. Their new album is called The Second. It is their 2nd album. The title also refers to the eponymous song that lasts exactly one second. It is unofficially the shortest song ever put on CD. The second also has a thematic reference. One second can change one’s life. One second is enough to change history. Remember Hiroshima.

The album starts energetically with Zusammen. Love in the moshpit is a trashy track. “What happens in the moshpit, stays in the moshpit”, is a variation on a well known one-liner. Dead man walking starts as a ballad, but develops into a heavy track. The guitars in Stars tonight remind me of Guns’n Roses and Aerosmith. Digging a hole is reminiscent of Alice in Chains.

C.E.O. starts with a terrific bass line that reminds of Motorhead. Closed door is ballad with a layer of pathos. The track is arranged with cellos and ends with a sample of a radionews broadcast concerning Kurt Cobain’s death. In Tarantula and Hallelujahland you can hear the influences of Iron Maiden.

Although the record undeniably has it strong moments (especially Digging a hole and Tarantula), I’m not impressed by the whole. The second fails to carry me away like any good record does. This review might not be that positive, other reviews were. This record even received some nice scores. Obviously many people like this band or believe in its potential. So maybe you better check it out yourself. Below you can see the video for Hallelujahland.