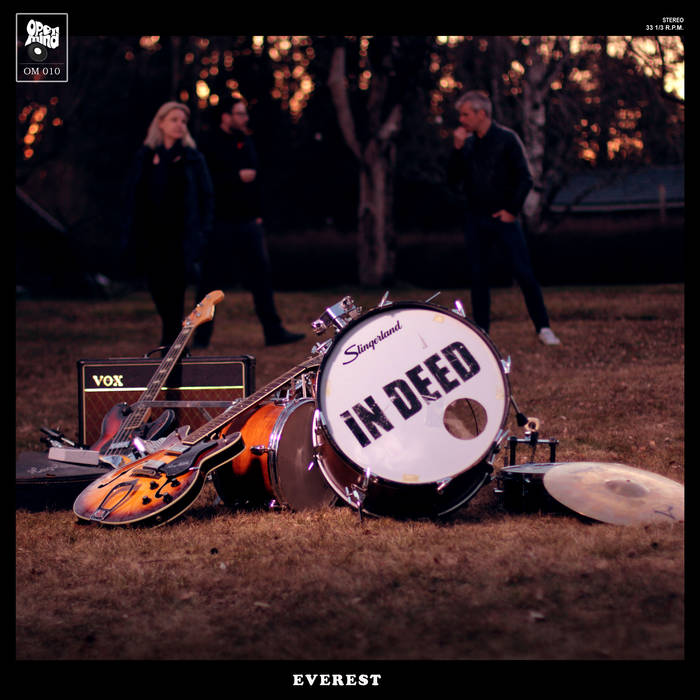 The country of Sweden continues to provide the world with melodic and infectious bands which crisscross genres with noise rock and harmonious sounds. None more so representative of this sound is In Deed, pumping their guitar driven beauty into the atmosphere since the mid-nineties. They released one self-titled mini-album, before coming fully into prominence in their native country courtesy of the stunning 2001 debut long-player At 4000 Meters. Since then, their follow-up Everest released as a vinyl only edition in 2017, now gets a wider circulation, and first time on CD courtesy of Los Angeles based Big Stir Records. This time Everest is expanded with three new thrilling tracks, ripe for discovery, and rippling with energy.

Taking the mantle from fellow Swedish powerhouse The Cardigans, In Deed cast an energetic spell from the get-go. Everest contains a solid structure, as the new tracks meshes with the older material, and blisters through all thirteen-tracks within a playground of enjoyment. Opening with the poignant “Another Start”, anthemic of the bands new-found vitality, and launching with a guitar rhythm that is pulled from the nineties with a dramatic vocal by Linda Karlsberg. From here the album sparkles with a raw intensity, within the acoustic, stripped back “Five Times A Day” with the band providing a sixties “oh-oh” harmony.

The track “What Once Was” has an air of The Cranberries to it, playful and executed with a sharpness which showcases the very chemistry within the band. With the mid-change erupting further sounds and cinematic styled soundscapes. The songs are short, punchy and wholly enjoyable, with shades of punk, “Never Really Noticed” outshines most modern, female-fronted bands. Not anchored in the Riot Grrrl premise, the music is more inspired and not delivered with an in-your-face angst. The single “Heart Attack” is a catchy, addictive number, the guitar tones of Richard Öhrn are breathtaking and from another generation entirely. At times it is hard to pinpoint if the guitar lines are reversed for affect. “Fantastic” is a change in pace with a hypnotic, acoustic guitar pattern, here the vocals of Karlsberg are more to the front, again with backing which adds an extra dimension to the song. However, the solo pierces through the speakers, with its melodic textures it would not be out of place on a George Harrison album. With that in mind, “According To You” is straight out of the sixties, with an updated fresh sound.

In Deed is the sound of a band and not just a talented singer with some backing musicians, the cohesive nature of the outfit provides a precision based album. Both tracks “Song To You” and the snarling “Flavor Of The Month”, the latter with the classic, organ driven power, making it undeniably foot-tapping greatness. The closing and longest track of the set, “15 Minor Hours” clocks in at five-minutes thirty. And takes all the themes of heartbreak, relationships and the ideas of self-preservation from Everest, presenting them in one epic piece. With a slight psychedelic feel to the track, courtesy of the organ again, and some vigorous tempo changes, this is a thriller from start to finish. With the refreshed Everest, In Deed have nailed an excellent album that demands further plays. Hopefully audiences will not have to wait long for further works such as this.

11.Flavour Of The Month